To turn Earth into a diamond.

This unnamed young member of the Slitheen, a criminal family from Raxocoricofallapatorius and appears as a minor antagonist in The Sarah Jane Adventures episode The Gift. In 2009, he used the body of a young boy called Chris and stole a matter compressor from the Pharos Institute (as he had accidentally sat on the last one) and was pursued by Sarah Jane Smith and her gang. He eventually remove his human disguise and met up with older Slitheen who was disguised as a teenage boy called Dave and planned to use the matter compressor to turn Earth into a diamond. But before they could do so Leef Blathereen and her husband Tree arrived and teleported the two Slitheen away to be tried and executed.

Though since Leef and Tree were later revealed to be criminals too and members of the Slitheen-Blathereen family (who took after their Slitheen relatives), it is possible that they teleported Chris and Dave to safety rather than be executed. 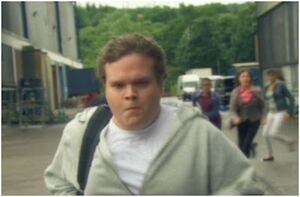 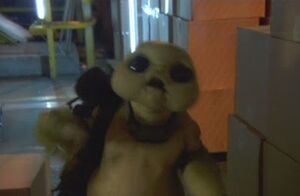 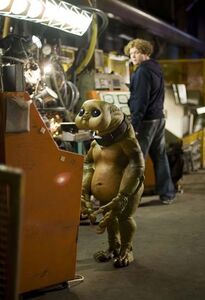 "Chris" and his companion "Dave".
Add a photo to this gallery

Retrieved from "https://villains.fandom.com/wiki/Chris_Slitheen?oldid=2988255"
Community content is available under CC-BY-SA unless otherwise noted.