To escape from prison (failed).

Christian Longo is the main antagonist of the 2015 drama/mystery and suspense film True Story. He is a fictionalized version of the real christian Longo, who was found guilty of murdering his family in 1998.

He was portrayed by James Franco who also played New Goblin in Sam Raimi's Spider-Man trilogy, Alien in Spring Breakers, and Gator Bodine in Homefront.

He is a narcissistic psychopath who murdered his wife and children. Journalist Michael Finkel interviews him after he is arrested, and Longo manipulates him into writing a sympathetic account of the crime so he can escape punishment.

Eventually, Finkel realizes that Longo is using him, and tells the police about the incriminating information Longo had told him. Longo is found guilty and sentenced to life in prison. Longo has one last interview with Finkel, and spitefully tells him that they are just alike, an idea that haunts Finkel. 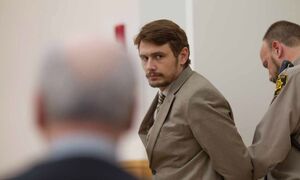 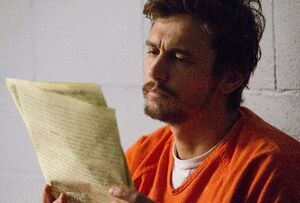 Add a photo to this gallery
Retrieved from "https://villains.fandom.com/wiki/Christian_Longo_(True_Story)?oldid=3797822"
Community content is available under CC-BY-SA unless otherwise noted.