Influencing her "owner" to referred to her enemies as "Shitters".
Killing those who torments Arnie Cunningham.
Killing everyone whom she thinks that she is contested for Arnie's affection with.

Hunt down those who tormented her owner Arnie Cunningham.

Kill Dennis Guilder and Leigh Cabot.
Kill all who came up against her.

Christine is a possessed red 1958 Plymouth Fury vintage vehicle with a life of her own and the titular main antagonist of the Stephen King novel Christine, as well as its famous 1983 horror film adaptation of the same name directed by famed horror master John Carpenter.

Despite being a car, Christine is often referred to as a female and seems to have the mannerisms of a mean-spirited girlfriend when it comes to her new owners.

While having no voice, the sound effects for her were provided by Robert Nichols II.

In the original novel and film, Christine kills anyone who torments her new owner named Arnold Richard "Arnie" Cunningham. The relationship between the two becoming more and more disturbing as the car's corruption took control, turning him away from everyone including his parents Michael and Regina Cunningham. In the end, Christine's owner was killed and she seemed to express a moment of genuine grief over his passing before attempting to kill the other two protagonists of the film named Dennis Guilder and Leigh Cabot.

The film also shows her killing both an assembly line inspector and the manager Mr. Will Darnell of his do-it-yourself auto-repair garage by crushing them against the steering wheel with her seat, the former due to dropping cigar ash on her seat. In the book, the inspector does not appear and the garage owner Darnell is run-down when Christine drives into his home. Another scene occurs when Arnie's girlfriend Leigh begins to choke on a hamburger and Christine attempts to entrap her within the cab by locking the doors and such.

However, they fought back against her and did great damage to the car, however, Christine rapidly repaired herself and the heroes were forced to crush the car completely to stop her returning, however, the audience eventually sees Christine slowly trying to repair herself, despite being completely destroyed, although she remains in her crushed state.

In the original novel, however, Dennis is led to believe that Christine has made a return when he reads of the death of the surviving Repperton gang member getting run-down at a drive-in theater by a red car. Thus, it is hinted that Christine has survived, and Dennis fears that the evil car is out looking for him, Leigh, and everyone else who stood against her.

In the original novel, Christine is accompanied by the spirit of her previous owner, George LeBay's late brother and retired American WWII-veteran Roland D. LeBay, whose role is greatly nonexistent in the film adaptation, who aids her in the murders of the Repperton Gang, particularly taunting the gang leader Buddy as he kills him.

Before his suicide by exhaust fumes inside Christine, his five-year-old daughter, Rita LeBay, choked to death on a small hamburger while sitting in that same car, and his wife, Veronica ("Rita" in the film adaption), after being broken by the tragedy of their only child, soon died from carbon monoxide poisoning in the similar suicidal fashion as her callous husband, Roland, later had.

He is also implied to have been responsible for somehow causing the deaths of Arnie and his mother Regina as they attempted to flee in another car. When confronted, LeBay and Christine came with Arnie's father Michael dead. Following Christine's defeat, LeBay seems to be taken out in the process. 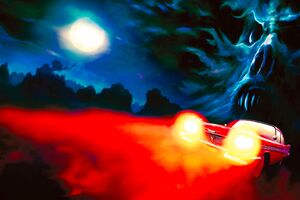 Christine as seen in the novel Christine .

Christine's cameo appearance in Cat's Eye.
Add a photo to this gallery 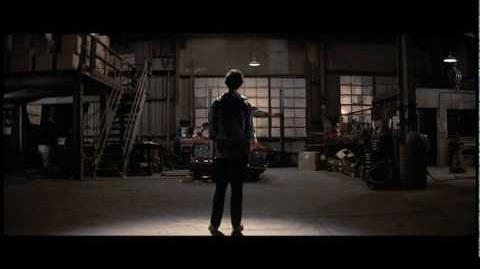 Christine-Car Repair
Add a photo to this gallery

Retrieved from "https://villains.fandom.com/wiki/Christine_(Stephen_King)?oldid=4190543"
Community content is available under CC-BY-SA unless otherwise noted.