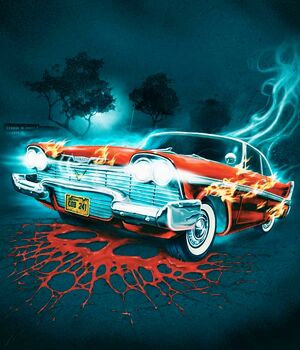 thumb|300px|right|the infamous scene where Christine shows off her regenerative powersChristine is a possessed automobile with a life of her own and the chief antagonist of the Stephen King novel of the same name as well as its famous movie adaptation, despite being a vehicle she is often referred to as a female and seems to have the mannerisms of a mean-spirited girlfriend when it comes to her new owners: in the film Christine kills anyone that gets in her way while also taking over the mind and soul of the teen who bought her, the relationship between the two becoming more and more disturbing as the car's corruption took control - in the end Christine's owner was killed and she seemed to express a moment of geniune grief over his passing before attempting to kill the other two protoganists of the movie.

However they fought back against her and did great damage to the car, however Christine rapidly repaired herself and the heroes were forced to crush the car completely to stop her returning, however at the end of the movie the audience see Christine slowly trying to repair herself, despite being completely destroyed.

Retrieved from "https://villains.fandom.com/wiki/Christine_(Stephen_King)?oldid=160928"
Community content is available under CC-BY-SA unless otherwise noted.