Christine Hill is a reporter who serves as a minor antagonist throughout the fourth season of Dexter.

She was portrayed by Courtney Ford.

Christine first appeared in Dexter's season four opener "Living the Dream" when she was at a crime scene looking for a scoop and was encountered by Det. Joseph Quinn.

Eventually, Christine and Quinn would begin a romantic relationship due to the countless run-ins, but she would use that to gain knowledge of the case regarding The Trinity Killer, whose real name is Arthur Mitchell. At the end of the episode "Hungry Man", it is revealed that Christine is actually Arthur's daughter, and in the following episode, "Lost Boys," Christine was also revealed as the one who shot and killed Special Agent Frank Lundy and shot and wounded Det. Deb Morgan to protect her father; the latest in a number of acts done to protect him.

Christine's relationship with Arthur was a toxic one; mainly due to Arthur ignoring her pleas for help when she is apprehended, but she continued not to reveal his identity as her father. However, after getting blown off again by Arthur in the episode "Hello, Dexter Morgan", Christine tearfully decides to tell Deb about him, but she is told that they already learned the identity of The Trinity Killer and Christine's father, but it was not Arthur.

Thinking that her father has covered her tracks, Christine talks about how she became a killer like him to please him, but to no avail, before she pulls out a gun and kills herself by shooting herself in the head. 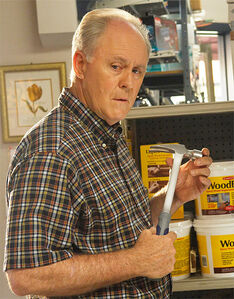 Retrieved from "https://villains.fandom.com/wiki/Christine_Hill?oldid=4206738"
Community content is available under CC-BY-SA unless otherwise noted.