Cover up the bad publicity of his company created by Chucky (partially succeeded).

He was portrayed by the late Peter Haskell.

He wants to try and erase the bad publicity that came when Andy Barclay went to the media about his Good Guy doll being possessed by Charles Lee Ray. When consulting with his assistant Trevor Mattson, he gave him some good news that the police denied Andy's story, and his mother, who backed up her son's testimony, was sent to psychiatric evaluation. However, Mattson admits now the company's biggest problem has been the rumours, that people believe someone at the company tampered with the doll's voice cassette. He then tells Mr. Sullivan the better news that they found the doll, Chucky, and that they were going to rebuild him, to prove that there was nothing wrong with it. When he and Mattson go to check on the rebuiding progress, they watch in shock when the machinery that puts the eyes in the doll has jammed, and electrocutes a worker, nearly killing him. This only infuriates Sullivan, not wanting more bad publicity for the company. He orders the accident to be covered up, and leaves Chucky in the care of Mattson.

Eight years after Child's Play 2, Play Pals has recovered from the bad publicity arising from Chucky. Sullivan believes those bad years are far behind them, and decides to re-release the Good Guy dolls again, as they were their best seller. One of his employees is concerned that the dolls would cause another child to be traumatized; however, Mr. Sullivan tells them that Andy was a disturbed boy and long forgotten. Play Pals recycles old Good Guys for their new ones, and unbeknownst to them, use Chucky's remains and revive him.

Sullivan recieves the first doll of the production line, Chucky, and takes it home with him. Later that night, Chucky toys with his sanity by using the other Play Pal products in his home. When Chucky finally reveals himself, Sullivan realized Andy was right about Chucky and attempts to flee, but he is stabbed in the back with a dart. While on the ground, he is strangled to death with a yo-yo. 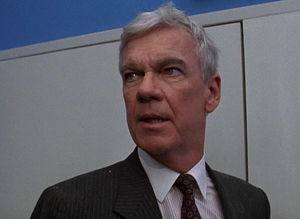 Retrieved from "https://villains.fandom.com/wiki/Christopher_Sullivan?oldid=3889179"
Community content is available under CC-BY-SA unless otherwise noted.