Save her mother (failed).

Christina "Christy" Hills is the main protagonist anti-villainess in I Spit On Your Grave: Deja Vu. She is the daughter of Jennifer Hills and Johnny Stillman, when the former was raped by the latter. After her mom is killed by the vengeful families of the rapists and she is raped herself, she follows in her mother's footsteps and takes justice into her own hands.

Christina "Christy" Hills is the only child of rape victim, murderer, and best selling-author of Jennifer Hills. She works as a famous supermodel. She gets kidnapped by the families of her mother's victims. She tries to find and save her mother but is too late and finds her dead. She tries to get help but failed and noticed that her mother's body and van dissapeared. She is raped by Becky and Kevin, but Herman lets her go. She stole clothes and began her own quest for revenge and would stop at nothing to get back at the families and avenge her mother's death. First, she goes after Herman and after a long battle, she finally kills him by stabbing him in the back with a sickle and shoots him. Then she goes after Kevin and Scotty. She seduces Kevin and they start to have sexual intercourse but she kills Kevin by stabbing him in the testicles and dies of blood loss and shoots Scotty in the butt and the bullet comes out of the head. After nearly dying from Becky, she manages to defeat and kill her. She goes to her mother's 'grave' and says she got them and she's gonna take her body back and give her 'the best funeral New York has ever seen', but Henry, Millie, and Beady Eyes are revealed to be revenge-seeking relatives of the victims of Jennifer Hills too and attacks her. But Christy survives and kills Beady Eyes and Millie, before leaving Henry shot himself in the head. With her revenge complete and her mother successfully avenged, she later she goes to church and takes a cross off the wall and leaves it on the floor. The movie ends with Christy driving away in the hat that belonged to Johnny and Becky and with her mother's body in the trunk to take it back to New York for a real funeral being noticed by the children of Johnny and Becky, who are also Christy's half-siblings, wondering who she was and why she had their grandparents' truck. 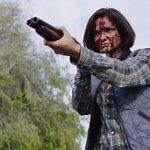 Add a photo to this gallery
Retrieved from "https://villains.fandom.com/wiki/Christy_Hills?oldid=3610490"
Community content is available under CC-BY-SA unless otherwise noted.
FandomShop DC Trivia GalaxyQuest