Filming and torturing his victims.

ChromeSkull is a fictional serial killer featured in the 2009 slasher film Laid to Rest, and the 2011 sequel film ChromeSkull: Laid to Rest 2. He is set to appear in a upcoming prequel which will presumably elaborate on his past and how he became ChromeSkull.

He was portrayed by Nick Principe.

Chrome Skull was the name attributed to a psychopathic killer who preyed upon innocent young women in the Southeastern United States in the late 2000s. Little is known about this man, but it is possible that his true name might have been Jesse Cromeans, a resident of Jacksonville, Florida. ChromeSkull was a mute who wore a disguise consisting of a black coat, pants and gloves and a chrome-plated mask in the shape of a skull. He enjoyed videotaping his victims as he tormented them and utilized a shoulder-mounted mini-camera to record their final moments as well as audio samples of their voices. Since he was mute, ChromeSkull would keep all of his collected audio samples on a mini-recorder and played select tracks to communicate his thoughts and desires to others. Immensely strong, ChromeSkull's preferred weapons of choice were a pair of twin hunting knives.

In 2007, ChromeSkull had an arrangement with funeral director Mister Jones and used the coffin construction building adjacent to the Jones Funeral Home to conduct his murders. One of ChromeSkull's potential victims, an unidentified prostitute, managed to escape from him. He pursued her across the Florida countryside, claiming several more victims including the town sheriff, but the girl managed to escape from him. ChromeSkull was incapacitated when a man named Steven switched out the adhesive he used to apply his mask to his face with a highly corrosive acid.

He later returned in the sequel Laid to Rest 2. It takes place not long after the first movie where the mysterious organization he apparently runs nurses him back to heath. One of the assistances tries to take his place throughout the film and is killed as a result. After brutally murdering at least three cops, during the climax he is shot and thought dead by a detective and one of his recent would be nearly blind victims. However, he is revealed to be alive and well due to wearing a bullet proof vest. The ending scene shows him to be entering some city apparently on Halloween ready to start yet another rampage after talking to what appears to be mistress/known assistant. The last scene of the film (Post Credit) shows Chromeskull's supposed wife who is nearing the end of her pregnancy, finding out about his killings and shoots herself in an interagation room. 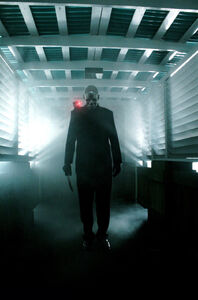 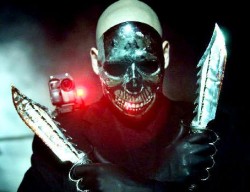 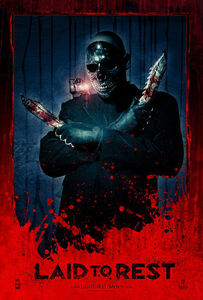 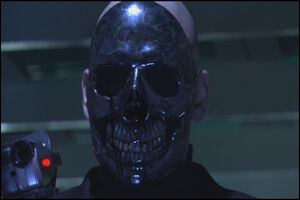 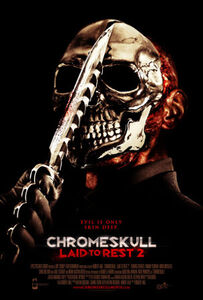 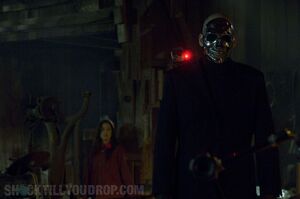 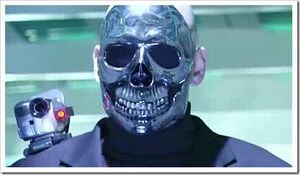 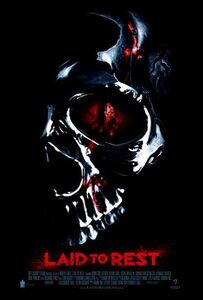 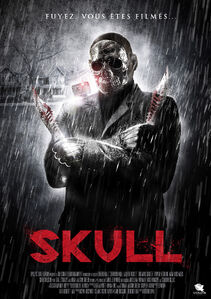 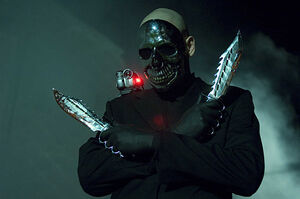 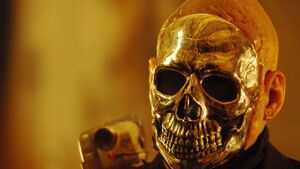 Add a photo to this gallery
Retrieved from "https://villains.fandom.com/wiki/ChromeSkull?oldid=3701093"
Community content is available under CC-BY-SA unless otherwise noted.