Continue to make money off of Sonia Strumm (failed).

Chrys Golds is an antagonist in Mega Man Star Force. He is Sonia Strumm's manager and presumed guardian. He is a greedy businessman who only uses Sonia's talent and fame to gain as much money as possible.

He was voiced by Takuma Suzuki in the Japanese version of the anime.

He is a talent, but greedy manager who is often depicted his love for money. He gets annoyed very easily whenever Sonia runs away. He seems to have no problem abusing or hurting children, as he take advantage of Sonia's talent, dragging her to the concert and hitting Geo when the young boy tried to protect Sonia from him when he was angry.

Most of his background is unknown, other than being the manager of Sonia Strumm. A year later, Chrys became Sonia's manager after her mother's death and meeting Lyra.

When Geo wakes up, hearing knocking at the door. While thinking if it was Bob Copper, Geo answers the door and revealing to be Chrys Golds barging in the young boy's house, screaming "Sonia!" Geo asks who is he, the man tries to explain the solution, but Geo guessed he's looking for Sonia. Chrys starts questioning the boy, thinking he was hiding the pop-star singer from him. He asked about Sonia's whereabouts, Geo says he doesn't know about what she looks like. The manager then says, "WHAT!? You've never seen her!? You need to watch more TV! How to you make conversation at school then?? He then apologizes to the boy before he leaves to continue his search for Sonia.

Arriving at the train tracks where the signal was, Sonia jumps out and asks Geo to hide her. Geo asks her if her name was Sonia Strumm, she says yes to him and tells her that her manager is looking for her. Sonia begs for his help, not wanting to go back to the man for his selfish reasons. Both Geo and Sonia hid behind the train as they heard Chrys' voice. After looking around the tracks, he leaves to continue the search. After taking her to Aaron Boreal's lab to hide, Chrys finds Sonia on the rooftop, screaming at her for "causing trouble" for him. Geo steps in to protect her from the manager but hits the boy to the ground. Aaron then calls him out on it, saying he's just a kid. But Chrys ignores him and drags Sonia out of the rooftop.

In the anime, he's played more of comic relief, unlike his videogame counterpart. In episode 8, Chrys is seen on the phone apologizing to his presumed boss not having located about Sonia, while Mega Man and Gemini Spark Black battle in his office, not noticing the fight. Even failing to notice being nearly cleaved by Black.

In episode 12, Chrys tries to force Sonia into wearing a dress and swimsuit outfit (which both were comically small). However, he failed then was tied and gag by Sonia as she goes to her concert, wearing her original outfit. 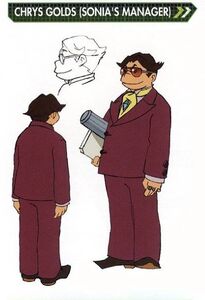 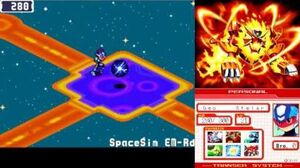