Killing humans and drinking their blood

Chubby is one of the main antagonists of the 1988 sci-fi-horror-comedy film Killer Klowns from Outer Space. He is the brother of Fatso

Chubby was seen with Rudy and Bibbo holding a pizza box with Shorty coming out to kill a teenage girl in cotton candy.

Chubby was later seen with Shorty, Rudy and Bibbo holding a trampoline for Debbie to jump out of her window to get away from Slim. Chubby was in the Klown Car participating with Bibbo, Rudy, Slim and Shorty to kill an annoying policeman who wouldn't let them into their headquarters with acid pies. Chubby is so fat that he can't walk properly like Fatso, he is forced to walk on one foot at a time, proven when he was walking to the Big Top.

Officer Hansen and Mike had seen Chubby use a crazy straw to drink out of one of the cotton candy cocoons, then when he was done, made a big belch.

He was seen again coming out to whack down Mike, Debbie and Officer Hansen until the Terenzi Brothers crash through the wall using their "Great and Powerful Jojo". He was last seen leaving when their real leader Klownzilla came in.

When Klownzilla explodes, the ship explodes and the klowns assumingly die. 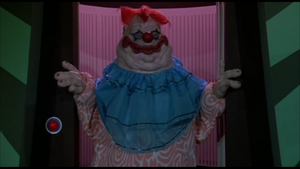 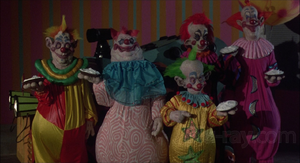