Rewrite history and rule the world.

He was portrayed by Joss Ackland.

A dissatisfied former gym teacher with a fascist worldview living in the 27th century utopia founded on Bill and Ted's music and philosophy, he is frustrated by what he sees as a foolish and frivolous society. He seeks to destroy the legacy of the "Wyld Stallyns" and institute his own ideas in their place by assassinating them before they can deliver their message of universal harmony. To this end, he hijacks Rufus' time travel booth and sends robotic Bill and Ted replicas back in time to kill the real duo and hijack their message. He monitors the robots' progress and gives them orders from the future with an orb-shaped communication device; the signals from the device are transmitted through the "Ted" robot's eyes.

De Nomolos' plan at first succeeds, and Bill and Ted are murdered. However, they manage to come back from the dead and destroy the evil robots with good robots created by the alien Station. With his plan on the brink of failure, De Nomolos arrives in the time booth, intent on dispatching the pair himself. Bill and Ted come up with a strategy to go back in time after their battle to set up objects they will need to defeat him now; these objects then instantly materialize in the present. De Nomolos' gun is knocked out of his hand by a falling sandbag and then he himself is trapped by a falling cage. De Nomolos, undaunted, explains that he can use this strategy as well, and he conjures a key to free himself, and then a new gun—which is instantly revealed to be fake. Bill and Ted explain that only the winners—them—will be able to go back in time to set things up—including the key and gun. After a "melvin" (wedgie) from Death (which De Nomolos seems to enjoy), he is arrested by Ted's dad Captain Logan.

It is later revealed in the credits sequence that De Nomolos eventually marries Missy, a young woman who was previously married to Bill's dad, and then Ted's.

Chuck De Nomolos returns in the comics Bill & Ted's Most Triumphant Return that picks up from Bogus Journey and rules the future. He also appears in the comic miniseries 'Bill and Ted Go to Hell.' By this point, De Nomolos has reformed, and while he still dislikes Bill and Ted, Missy convinces him to help them in their mission to venture into Hell and save the imprisoned Grim Reaper, so he will be remembered in the future as a hero rather than as a villain. 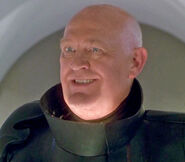 Add a photo to this gallery
Retrieved from "https://villains.fandom.com/wiki/Chuck_De_Nomolos?oldid=3625549"
Community content is available under CC-BY-SA unless otherwise noted.