Protect "Katey" from the "Psychopaths".

Charles "Chuck" Greene is the protagonist of Dead Rising 2. He appears as a psychopath and an anti-villain in the what-if story of the video game, Dead Rising 2: Off the Record. He replaced Leon Bell as a boss fight.

Frank West confronts him in the mission, "People Like Us".

He attempts to touch a yellow bike until Chuck shows up saying to not touch his bike. Frank apologizes and Chuck did the same. When he attempts to get him to an emergency shelter, Chuck refuses saying his daughter, Katey, needs Zombrex for 24 hours. However, in this game, Katey has died, and in order to cope with this loss, Chuck duct taped a doll on his back and named her after his dead daughter, living in denial of her death and became an alcoholic to kill the pain. Frank later realizes that Chuck has gone insane so he grabs the doll's leg, trying to convince Chuck to go with him. Misunderstanding, Chuck is enraged, believing Frank was trying to hurt her, and is one of those "Nutbars", He than gets on his bike and says "nobody puts a hand on my little girl".

After Frank defeats him, Chuck crashes his bike and he is sent to the ground. He crawls his way over to the head of the doll (which fell apart from the fall). In a sad sight Chuck holds it, saying "I can't imagine what I would do if anything were ever to happen you."

Chuck then appears to die as Frank begins to walk away. As he's walking, he notices Chuck's trailer keys, so he picks them up. He turns around and looks at where Chuck was laying moments ago to find he has vanished. indicating Chuck is still alive. Frank then remarks, "Okay, this place is nuts." 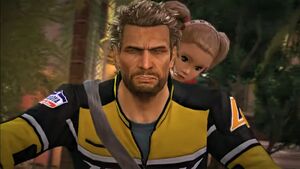 Retrieved from "https://villains.fandom.com/wiki/Chuck_Greene?oldid=3325017"
Community content is available under CC-BY-SA unless otherwise noted.