Interviewing people on his talk show.

Produce propaganda for the Nazi regime.
Avoid being killed by Jessica Valiant (both failed).

Charles "Chuck" Lorentz is a former OSA Agent who works as the Head Producer of American Propaganda for the Nazi occupation of America and the secondary antagonist of the Wolfenstein: The New Colossus DLC The Diaries of Agent Silent Death.

He was voiced by JB Blanc, who also voiced Enrico Maxwell in the Hellsing series, Nigel Bloch in James Bond 007: Agent Under Fire , Diablo in Diablo III, The Tower of Sauron in Middle-earth: Shadow of Mordor, Bane in the Batman: Arkham series, Bane in Batman: The Enemy Within, Alighiero Alighieri in Dante's Inferno, Romeo in Minecraft: Story Mode, Kano in Mortal Kombat 11, Sasori in the Naruto video games, Brian Irons in Resident Evil: The Darkside Chronicles, Zinyak in Saints Row IV, Jyggalag in The Elder Scrolls Online, Kuben Blisk in the Titanfall series, and Nakeem Grindina in Bleach.

Chuck Lorentz was originally an undercover OSA agent until he defected to the Nazis and sold out Jack Valiant, resulting in Jack's capture and death. As a reward, Chuck was appointed Head Producer of American Propaganda at the Third Reich's propaganda organization Paragon Pictures. In addition, Chuck was able to become the head of his own talk show, "Lorentz's late Show". Chuck also became close to General Gerhardt Dunkel, having him on talk show, but he had a false friendship with Überkommandant Hans Stiglitz.

In his diary, Chuck states that Jack considered him a friend, and put a lot of faith in Lorentz until his betrayal. Chuck also states that he doesn't feel guilty for betraying Jack, and that doing so allowed him to succeed in his dreams, becoming a movie producer and actor.

In the following years, Chuck became egocentric and cocky, and himself superior to his men due to his status as an actor. Underneath his arrogance and ego, he was a coward at heart, promising his men that their names would be in the annals of Reich history if they protect him. Additionally, he was hated by everyone who worked at Paragon studio, and some of his soldiers talked behind his back. As a result, some of his men didn't pay close attention to any terrorist activity, allowing Jessica to infiltrate the studio.

Lorentz later cast himself as the part of Blitzmensch in the film Blitzmensch Returns: Vengeance for the Aryan Race, and did so after replacing the original actor, von Strachwitz. After replacing von Strachwitz, Chuck wrote in his memo that quality of the film improved with him at the helm, and requested a new costume be made for him. A script was written for film by Frau Irene Engel's eldest son, Adalwardus, and Chuck didn't like the himself. Despite this, he worked with the script mainly out of fear of getting Frau Engel's wrath.

While in hiding, the Crimson Bulldog gave Jessica a file of the men who betrayed her husband, and she decided to get her revenge against them. After learning of Stiglitz's death, Chuck ordered his men to protect him while he was practicing his lines, and asked for extra security at his office door. As he was practicing his role with his bodyguard and assistant Sebastian, Chuck was tracked down and killed by Jessica Valiant in revenge for betraying her husband. Afterward, Jessica traveled to Moon Base Gamma, and successfully assassinated Dunkel.

Lorentz selling Jack to the Nazis.

Lorentz and Dunkel on his tv show, holding a "Terror Billy" action figure. 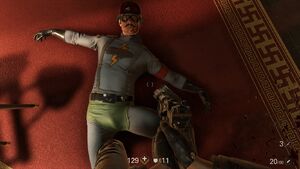 Lorentz's corpse.
Add a photo to this gallery

Retrieved from "https://villains.fandom.com/wiki/Chuck_Lorentz?oldid=4150979"
Community content is available under CC-BY-SA unless otherwise noted.