Leader of the Futurians

Controlling King Ghidorah to do his bidding.

Save Japan from Godzilla (allegedly).

Chuck Wilson is the leader of the Futurians and the central antagonist of the 1991 film Godzilla vs. King Ghidorah.

He was portrayed by the actor of the same name.

Chuck Wilson comes from the future year of 2204. Japan has become the most powerful and wealthiest nation on the planet, having bought all of Africa and South America. Out of his paranoia that Japan will become a superpower and take control of the rest of the planet, Wilson establishes the Equal Environment of Earth Union and steals the time machine MOTHER from the Earth Union and goes back in time to prevent Japan from conquering the world.

Arriving in the year 1992, MOTHER lands on Mount Fuji. The Equal Environment of Earth Union, consisting of Wilson, Grenchiko, Emmy Kano, their assistant androids, and three small genetically engineered reptilian bat-like creatures called Dorats, introduce themselves as the Futurians. They lie about the future and explain that in their time, Godzilla destroyed Japan. They suggest that by using their time machine, they can go back in time and prevent Godzilla from becoming an indestructible force of nature.

In the Pacific War of 1944, a dinosaur living on Lagos Island indirectly rescues a group of Japanese soldiers from American soldiers and is wounded following the American soldiers bombing the island. When a test hydrogen bomb detonates in 1954, Lagos Island is destroyed and the dinosaur mutates into Godzilla. To prevent this, after the soldiers evacuate the island, the Futurians use the MOTHER to teleport the dinosaur away to the bottom of the Bering Sea. Before departing back to the present, the Futurians secretly release the Dorats onto the island. When the bomb goes off, the Dorats mutate and fuse into King Ghidorah.

Upon returning to 1992, Wilson takes control of Ghidorah and uses him to destroy the city of Fukuoka, resulting in hundreds of casualties. The Futurians force Japan to surrender and threat greater loss, but they refuse. Horrified over Wilson's true plan, Emmy reveals to Koichiro Terasawa the Futurians' true goal of destroying Japan before it becomes a superpower and reworks the android M11 to help her stop Wilson.

Meanwhile, the Japanese government sends a nuclear submarine to the Bering Sea, believing the dinosaur that would become Godzilla was still dormant, only to discover that he was already mutated from a sunken Russian submarine. Godzilla destroys the submarine and absorbs its radiation, causing him to grow to a hundred meters. Coming ashore in Hokkaido, Godzilla clashes with Ghidorah, with Ghidorah gaining the upper hand. Fortunately, Emmy, M11, and Terasawa sabotage the computer of the MOTHER, releasing the Futurians' control over Ghidorah, allowing Godzilla to overpower him.

They are then confronted by Wilson and Grenchiko, taunting them that even if Ghidorah was to be defeated by Godzilla, there was nothing to stop Godzilla from destroying the rest of Japan and activate the transporter to send the MOTHER back to 2204. With the help of M11, Emmy and Terasawa knock out Wilson and Grenchiko and make their escape on the KIDS. Emmy uses the KIDS to teleport the MOTHER directly in front of Godzilla, who destroys it with his atomic breath only a minute before it could return to the future, killing Wilson and Grenchiko in the process. 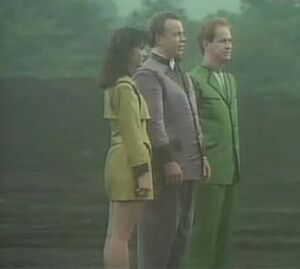 Wilson, along with Emmi and Grenchiko. 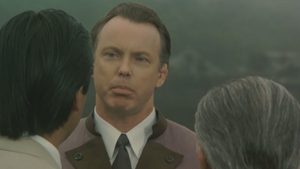 Wilson introducing himself to the people of Japan. 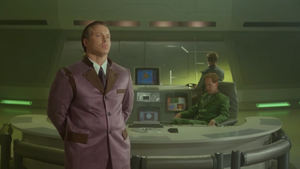 Wilson telling the other Futurians his plan of destroying Japan. 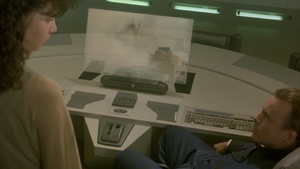 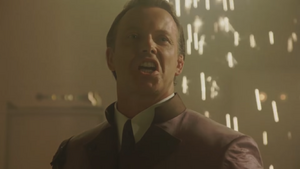 Wilson gloating to the heroes that Japan has no future. 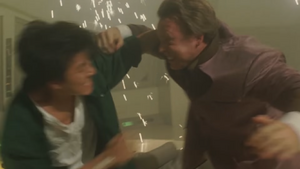 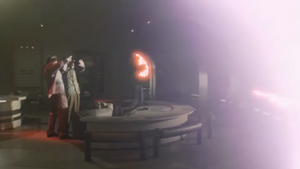 Wilson and Grenchiko's final moments before they are annihilated by Godzilla's breath.