Causing pain upon other people.

Help the Jokerz in taking over Gotham City.

Help the Joker in his return to power.

Chucko is a criminal who is part of the Jokerz gang in the DC animated universe.

He was voiced by Don Harvey.

Charles Buntz under his new name was a nasty bullying type who truly enjoys inflicting misery on others. A head enforcer for his Jokerz gang, he was a lot stronger and faster than his flabby gut would lead one to believe. True to his sadistic nature, Chucko's face was always hidden behind his mocking clown mask (with the exception of the Jokerz heist at Wayne Enterprises, where he was wearing a gas mask instead). He is the leader of his gang of Jokerz. Considered the leader of the Jokerz that aided the Joker, Chucko coordinated with Ghoul on what to hit and when.

Chucko underwent physical alteration when in the service of Chronos. The bottom half of his body has been replaced by a motor powered unicycle-like vehicle with a red ball that has a white star on it.

His main weapon is an energy saber; this device, further enhanced by unknown means by Chronos, released bolts of energy upon impact that were sufficiently powerful enough to cause Wonder Woman intense pain, even though she was successfully deflecting each blow with her indestructible bracers.

After Chronos determined that Chucko had tipped off Batman to when and where the original Batman, Wonder Woman and John Stewart would be arriving from the past, Chronos took him 65 million years back to the end of the Cretaceous period, where after being spotted by a Tyrannosaurus, Chucko noticed he had been placed in the epicenter of the famous meteorite impact that is said to have killed off the Dinosaurs. This of course, killed him as well. 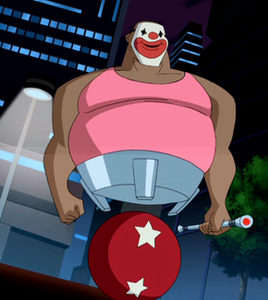 Cybernetically enchanced Chucko in Justice League Unlimited.
Add a photo to this gallery

Retrieved from "https://villains.fandom.com/wiki/Chucko?oldid=3326477"
Community content is available under CC-BY-SA unless otherwise noted.