Chuckolator is a minor villain in Mario & Luigi: SuperStar Saga. Like many Mario villains, it is a parody - in this case of soda mascots such as the (in)famous Kool Aid Man.

Chuckolator takes the form of a giant vaguely anthropomorphic can of soda with arms which attacks Mario and Luigi - at first it is shielded with a sword but once its shield is destroyed it resorts to transforming one of its arms into a sword while also attacking with its other arm, which resembles a gun: both attacks tend to spawn slime that does damage unless Mario and Luigi jump over them. During the battle, Bubbles appears to help the Chuckolator heal as he tells it his jokes. However, in the end, the Chuckolator is defeated and is reverted back to a barrel of soda.

In its defeat, Bubbles sends Mario and Luigi through a trap door where they and the barrel land in the Stardust fields. Mario accidentally fell into the barrel and swallowed all of the Chuckola Cola, making him bloat. Once the Mario bros return to the Beanbean Kingdom, Mario spits out the Chuckola Cola into Queen Bean's mouth, reverting her back to normal once she spits out the Belly Blech worm. 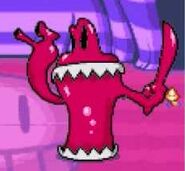