Be Andy Barclay's best friend no matter the cost (failed).

Kill as many people in order to ruin the name of Kaslan Corporation's CEO Henry Kaslan and avenge his former owner and creator for getting fired (succeeded).
Kill Andy's Mom, Karen (failed).

Chucky is the main antagonist of the 2019 horror film Child's Play, which is the reboot of the supernatural slasher film of the same name. He is an out-of-control toy who goes on a killing spree, due to his programming, while befriending a 14-year-old boy named Andy Barclay.

He was voiced by Mark Hamill, who also voiced various versions of the Joker and Ferris Boyle in the DC Comics properties, Ozai in Avatar: The Last Airbender, Colonel Muska in Castle in the Sky, Darth Bane in Star Wars: The Clone Wars, the Skeleton King in Super Robot Monkey Team Hyper Force Go!, the Hobgoblin in Spider-Man: The Animated Series, Maximus in the Fantastic Four animated series, Tony Zucco in The Batman, Stickybeard in Codename: Kids Next Door, Flint in Disney's Buzz Lightyear of Star Command, Niju in Balto II: Wolf Quest, Solomon Grundy in the DC Animated Universe, the Trickster in The Flash, Dictatious Maximus Galadrigal in Trollhunters, ShiverJack in Jake and the Never Land Pirates, Undergrowth in the Danny Phantom series, Agent Goodman in Recess: School's Out, Popsicles in The Powerpuff Girls, and Alvin the Treacherous in the How to Train Your Dragon series.

In Vietnam, an employee working for Kaslan Corporation is berated by his supervisor and is fired for toy operating. Before being let go, the employee decides to tinker with one of the Buddi models and removes the safety features to ruin the his former boss's company. As that Buddi doll was going to be delivered internationally, the disgruntled employee commits suicide.

After blackmailing one of her coworkers at the local shopping mall to get her son Andy an early birthday gift, Karen Barclay presents the Buddi doll to her son. While he is disinterested about the doll at first, Andy slowly warms up to the doll which christens itself Chucky. Unfortunately, Chucky slowly drifted into committing violent acts when Mickey Rooney, Andy's pet cat, scratches him. Seeing that the cat had hurt Andy, Chucky tries to strangle the cat to death in an effort of protecting his owner. Eventually, Andy befriends two kids—Falyn and Pugg respectively—through their love of Chucky's behaviors. What starts off as fun quickly turns dark when Chucky notices Andy and his friends reacting pleasurably to watching Texas Chainsaw Massacre 2, and he grabs a knife from the kitchen in a reenactment of the film. Thankfully, Andy and the others quickly disband him, but it leads to Chucky cutting Andy with the knife.

Chucky starts to torment Shane, Karen's boyfriend, climaxing in Shane threatening Andy and Andy's wish of him being gone from his life. When Shane returns home to his family, he is tasked with taking down the Christmas lights. Suddenly, he is kicked off his ladder, the resulting fall rendering both his ankles broken, and Chucky activates the lawnmower, slicing off his face before finishing him off with a knife after saying that it was for Tupac. He then takes the face and presents it to Andy as a gift.

Word of the death circulates throughout the town. Realizing it to have been Chucky's doing, Andy regretfully dismembers Chucky alongside Falyn and Pugg. After sending his body down the garbage chute, the apartment's electrician Gabe finds the Buddi doll and reassembles it, with selling it on the black market being the end goal. As he was now able to connect to the apartment's interface, Chucky giddily toys with Gabe before causing him to fall on a table saw killing him instantly. Chucky then makes Omar his new owner and upon hearing Detective Mike's mother Doreen call Andy her new best friend, Chucky hijacks a Kaslan Car and kills her personally after causing the car to crash.

Andy tries to convince his mother of Chucky's murderous nature, but ultimately fails, resulting in Karen taking him along to her next shift at the shopping mall in order to keep him nearby; while, at the same time, Mike travels to the mall as well, suspecting Andy to be the killer. However, Chucky takes control over the mall, and hijacks numerous toys—including the other Buddi dolls—to kill off numerous employees and customers, while activating the lockdown sequence to trap everyone inside. Andy and his friends manage to reach the exit, but Chucky reveals that he has kidnapped Karen amidst the chaos and is planning to kill her, forcing Andy to return. Andy faces Chucky only to be knocked out by a second Buddi doll; and upon him awakening, Chucky prepares to "fix" him to make him happy again by cutting him open. Before this can happen, Andy frees his mother and stabs Chucky, who attempts to lunge at him before being shot by Mike and decapitated by Karen.

Later, as paramedics tend to Karen, Mike and the other survivors, Andy and his friends further dismember Chucky's body in a nearby alleyway before setting it on fire, destroying him for good. Afterwards, Kaslan Corporation issues a mass recall of all Buddi dolls in the wake of Chucky's killing spree and places them into storage. However, one of the dolls begins to malfunction inside it's box, bearing the same red eyes and appearance as Chucky; implying that he has not been destroyed for good. Regardless whether he survived or not, Chucky did fulfill the purpose for which he was reprogrammed: his actions against potential customers of Kaslan Corporation products have indeed given the company a horrific reputation for selling a killer toy and forcing it to issue a massive recall, which means that Kaslan Corporation will most likely not recover for many years.

Chucky is a robotic doll with short ginger hair and freckles. He wears a blue, red, and yellow striped pullover, overalls with "Buddi" written on the front pocket, and red shoes. His eyes are blue but turn red when he's angry or about to kill someone.

Upon activation, Chucky himself exhibits a personality similar to that of a young child: mischievous, friendly, unable to discern right from wrong (but with good intentions), literal, and mimicking what he sees and hears. He loves Andy, and only wants him to be happy. He even displays genuine remorse and sadness when he sees that he has made Andy upset. He is also very protective of Andy, targeting Shane and Mickey Rooney when they antagonize his owner.

As the film progresses, however, Chucky "matures" and develops darker personality traits, with mischief turning to malice. This becomes apparent when he stalks, cripples, taunts, and kills Shane in a brutal fashion before presenting his face to Andy as a gift.

After he is damaged and deactivated, then recovered and repaired by the resident custodian, Chucky exhibits a personality similar to his original iteration: violent, angry, and sadistic. He becomes a vengeful serial killer, targeting anyone Andy has interacted with. He even attacks Andy in hopes of "opening him up" and "fixing" him. 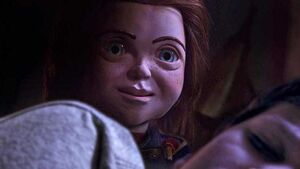 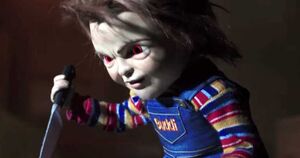 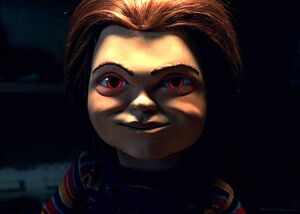 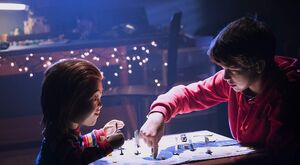 Andy and Chucky playing together. 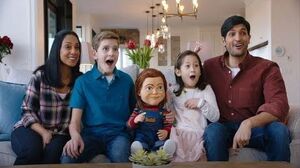 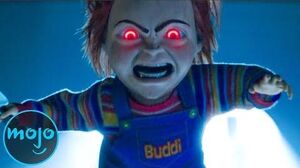