The Chupacabra (translated as "goat-sucker", originally known in spanish as 'chupacabras' or goats-sucker, in plural) is a cryptid said to appear in many rural regions of Latin America. Its name comes from the reportedly habit of this creature to suck the blood of goats. It is often depicted as a tall bipedal with spines on its back.

Many sightings of this creature have been reported in Puerto Rico, Nicaragua, Mexico, southern regions of United States, as well as Argentina and Brazil. However, little proof have been given to prove the creature's existence, and often such "sightings" have proven to be only fruit of the people's imagination.

According to the stories the Chupacabra may either be a genetic mutation, an undiscovered animal or (perhaps the more extreme theory) aliens - when treated as aliens many people (especially ufologists) think of them as being "pets" of the Greys or Reptoids.

However on a purely folkloric view the Chupacabra can be seen as a modern incarnation of the vampire found in countless legends, like the vampire the Chupacabra has become a popular creature in fiction: in fiction they are seen to be more violent towards humans than most stories state.

They are also one of several cryptids blamed for the phenomena of cattle mutilation (though other livestock has also suffered similar fates). 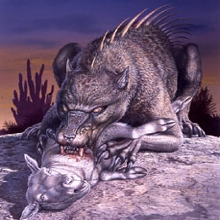 Another artist's depiction of a more canine-like Chupacabra. 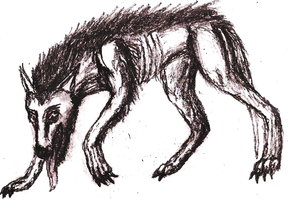 A more accurate illustration of the Chupacabra.

A drawing of a bipedal Chupacabra.