Playing with Ellie (before death).

Winston Churchill, better known as Church, is one of the two main antagonists of Pet Sematary by Stephen King, and both 1989 and 2019 film adaptations. He is the pet cat of Ellie Creed, and later helps Gage Creed (novel and 1989 film) or Ellie (2019 film) kill everyone in his path.

The storyline of Pet Sematary was inspired by Stephen King's own real-life experience when he and his family lived on the busy streets in Orrington as he wrote the novel.

The said street claimed the lives of pets that prompt Stephen's neighbors in that area built a cemetery for the said unfortunate pets where one of them was his daughter's pet Smucky. When Stephen discovers that his daughter still grief-stricken by Smucky's demise, this inspired Stephen for creating the Church character for his story, Pet Sematary.

Church was originally a cute, playful, and kittenish cat, who was loved by his owner, Ellie, and her family. However, he was run over by a truck. Ellie wasn't at home that time, but she had a dream about his death and was terrified. When her father, Louis, found Church's body, he didn't know how to tell Ellie about that. His neighbor, Jud Crandall, wanted to help and lead Louis with the dead cat to the Pet Sematary where he buried Church.

The next day, Louis surprisingly found Church in the garage. At first, Louis thought that he buried the wrong cat yesterday, but then he noticed strange changes in Church's behavior. The cat was languid, clumsy and stolid. Moreover, he smelled terribly. When Ellie returned home, she no longer wanted to play with him. Since that, the whole Creed family started avoiding Church, by kicking and throwing him out the house, but he was always able to get inside somehow. Church also became very violent and killed many birds, mice, and rats, and left their crippled bodies lying around the house.

Jud then revealed to Louis the truth about the Pet Sematary: everything buried there was brought back to life. Many people buried their animals there, but only one (the bull) was violent after they were revived.

After Louis' son, Gage, was killed by a truck, Louis buries him in the Pet Sematary, too. Gage returned to life, but he was no longer the sweet and kind child, but a violent, homicidal, and emotionless maniac. Gage stole Louis' scalpel and walked into their neighbor, Jud Crandall's house along with Church. Jud tried to protect himself with a knife, but Church jumped on him, and forced him to drop it. Gage then jumps on the old man and stabbed Jud to death. They both then conned Gage's mother, Rachel and killed her, too.

When Louis headed to Jud's house to stop Gage, he saw Church in the garden. Louis decoyed Church with a raw steak and pricked him the lethal injection, which killed him for once and all. After he killed Gage, Louis soaked the house in kerosene, set it on fire, and left all of the bodies except Rachel's inside. 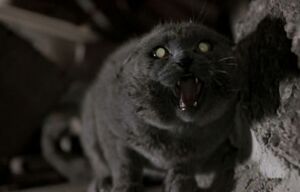 Retrieved from "https://villains.fandom.com/wiki/Church_(Stephen_King)?oldid=3771074"
Community content is available under CC-BY-SA unless otherwise noted.