Church of the Walls

Church of the Walls

Since the civilization within the wall began

Keep the knowledge about the Walls hidden from the general public at any costs (even at the cost of their own lives).

The Church of the Walls, also known as the Wall Cult or "Wall Worshippers", is a religious group of people who considers the Walls to be holy, with a lot of religious and political influence within them, and antagonistic faction in the Attack on Titan universe. Some of the cult's members possess knowledge about the Walls that is hidden from the public.

The cult worships the Walls above everything else, believing them to be sacred and untouchable. They worship Wall Rose, Wall Sina, and Wall Maria, and think it is their sworn duty to defend the Walls from any "impurities" like humans, rails, or Cannons. They have been shown to be unknowingly loyal, to the point where they would sacrifice their own lives if it meant the protection of the cult's secrets. In addition, they believe in a being called the Divine Architect, an entity with infinite knowledge, has a sublime love for human beings, and the walls. As implied by Pastor Nick shortly before the Female Titan crashed into the church.

Among the members of the cult are a variety of different people from different places. There are also priests who represent the Wall Cult. An unknown number of priests are involved in deep secrets regarding the Walls, which also includes information regarding the Wall Titans and possibly even the mystery of the Titans. The only notable member of the cult is Pastor Nick, who is eventually murdered by the cult members after seemingly revealing some of its secrets.

The Wall Cult is directly involved with the government, as seen when one of the priests attends a meeting with the fake King (King Fritz). Traitors are treated without any mercy. When Pastor Nick decided to help the Survey Corps, the central branch of the Military Police Brigade was sent after him, which caused him to be tortured and murdered. 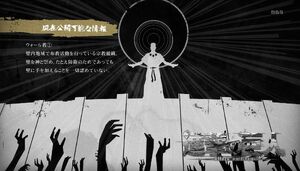 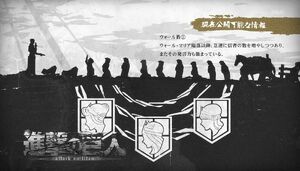 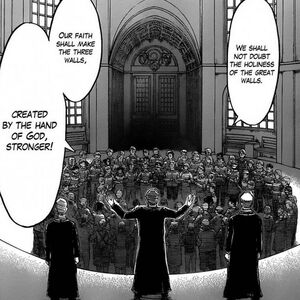