Get revenge on Dazai (Mostly failed).

Find out his origins (Succeeded).

Vengeful Mafioso
Chuuya Nakahara is an executive of the Port Mafia and a recurring antagonist in the anime and manga series Bungou Stray Dogs. He is a direct reference to the Japanese author with the same name.

He was voiced by Kishō Taniyama in the Japanese version, and by Nicolas Roye in the English dubbed version.

In general, Chuya comes off as an irritable and arrogant character, especially around Osamu Dazai, his former partner turned enemy and rival. He frequently smirks while in combat and is the type to criticize his opponents during combat.

He dislikes having to bargain or deal with the enemies and would much rather just fight them. This won't, however, keep him from completing the job. Despite his haughty, short-tempered attitude, he has always put the mission before himself.

When it comes to killing, Chuuya has the same mission-first attitude. He isn't particularly homicidal or overly brutal, but he will happily kill or torture if it's his mission. He also has at least some sense of morality as shown when he was openly disgusted by Dazai shooting the corpse of one of his victims repeatedly. Chuuya is rarely unnecessarily violent during missions, as he quickly stopped fighting with Yosano and Kenji to negotiate with Fukuzawa, though he can become violent when provoked. He expresses disinterest at fighting those who can’t challenge him, but doesn't care too much about who his opponents are if they can provide a challenge as he kicked Kenji into a wall with no hesitation despite the latter being only fourteen.

It is also revealed that Chuuya has some insecurity about his looks and has gone to great efforts to make himself look good through his clothing. He is easily provoked by making fun of something he is wearing.

His biggest weakness is his utter hatred of Dazai, who can easily set him off, causing Chuuya to make poor decisions or be distracted from the task at hand. Dazai and Ranpo have both used Chuuya's hatred for his former partner in order to manipulate him, often for a larger goal, but Dazai commonly does it simply to humiliate Chuuya.

Chuuya is extremely loyal to whatever group he is a part of. As part of Sheep, he was often used as a weapon to win conflicts, and went to great length to protect them from the mafia. Even after Dazai manipulated the group into betraying him, Chuuya refused to allow them to die and swore allegiance to the Port Mafia to keep them safe. Later, as a member of the mafia, Chuuya followed his orders no matter what, including those he did not enjoy. In the BEAST universe where Dazai lead the Port Mafia, Chuuya resisted the urge to kill him and protected him, as he did not want to betray the organization by murdering the boss. However, Chuuya's loathing of Q for murdering of his subordinates was enough for him to encourage Dazai to kill the child despite Mori's orders to bring them back alive.

While using Corruption, Chuuya undergoes a drastic change in personality, being driven completely insane as he is overwhelmed by the urge to mindlessly destroy his surroundings, causing him joy which he expresses by laughing and smiling. Unfortunately, Chuuya is not lucid in this state and is unable to care for his own health, rampaging even while bleeding profusely as Corruption breaks down his body. Understandably, Chuuya does not speak while using Corruption, though during DEAD APPLE, he screamed Dazai's name when he was pushed to his limit and about to be killed by the strain caused by his Ability.

During his teen years, Chuuya struggled with the possibility of not being human. His lack of memories from before he was seven, connection to Arahabaki and inability to dream made him suspect he was not really a human. This drove him to go to great lengths to find out his origins, even continuing to partner with Dazai after the Sheep hostages were released in hopes of figuring out what he was. Mori eventually got ahold of information regarding the experiments Chuuya had been a part of and used them as leverage to force him to remain a member of the Port Mafia. However, Chuuya stayed with the mafia even after learning of his origins as a modified clone. 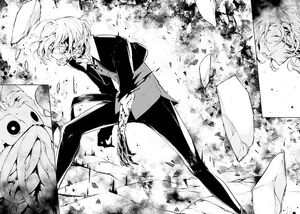 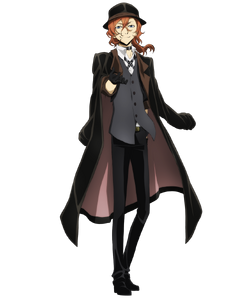 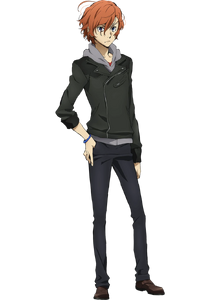 Chuuya when he was fifteen years old. 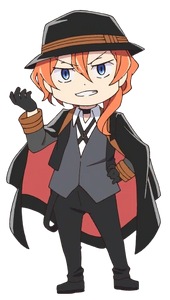 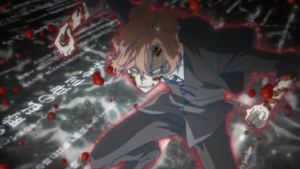 Chuuya using Corruption.
Add a photo to this gallery
Retrieved from "https://villains.fandom.com/wiki/Chuuya_Nakahara?oldid=4211379"
Community content is available under CC-BY-SA unless otherwise noted.