Help the Ghosthunter team in defeating El Charro Negro for free him from his bondage (possibly succeeded).

Chuy is a creature like an mayan mummy of completely unknown origins in anonymity. Serves the (former) major antagonist in the Mexican film La Leyenda del Charro Negro.

As the burden beast who is in charge to protecting the lands of The Underworld, he is the assistant of the former miner Resendo, mistreated and chained by him with a enchanted shackle.

Chuy is a undead creature of two meters high and black ash skin. A prominent head have an skeletal face. Bent and with bones showing on his back, its ribs are marked with black lines, the shape of both shoulders is strangely rectangular and go together with their thin bony arms. The eyes are completely dark and the irises not very visible. Uses bronze discs in the ears. Bandages on the wrists. A simple white toga with brown edges, being that, his only dress when discovering his body.

Previously, Chuy put a ceramic mask, wearing a green poncho that showed only his hands and even dragged him on the ground, in which orange stitching details are noticed in the form of spikes. On the sides of which there is a double stitching visible on the neck, he hung a necklace of teeth.

At the beginning of the plot, in the dark, Resendo carries Xóchitl in his arms and leaves it in a cellar, to be carried by Chuy, disappearing in the shadows. The beast, took Evaristo prisoner and sent him to work in the farm of El Charro Negro, to grind "agaves pineapples".

Arrival to the underworld, the Calaveritas are lost in a field of agaves. Hiding in a cart, was hauled by Chuy which was distracted by a bearing found thrown. After collecting the cargo, it takes it to the warehouse to process it. From there, the calaveristas leave without being seen by the creature, planning an escape.

At night, Xochitl and Evaristo try to rescue Don Andres and Alebrije, who are held inside of the Haunted House (from Xochimilco). There, Chuy feeds the house with corn cut by it. A minute after intense observation, the two are surprised by Resendo who orders Chuy to attack them. Evaristo, takes a stick of wood and hits Chuy's mask, throwing it away, so the monster reveals its true face, also removing the poncho and roaring in the face. With a single blow, the mummy, threw Evaristo away, making him fly through the air. The Calaveritas inside the house, activated their power of "ethereal purity", encepting their adversaries to take advantage of escape.

In the next act, Resendo lashes Chuy to attack them, but this already marrying, throws him away until stamping it against the wall of the hacienda. Deceased and dying they look for it from his pocket, while he was stunned, opening Chuy's shackle, freeing him from his bondage. In that instant, [the house grabs him and throws him as far as possible. Completes the translation of the soul of the Charro to Leo, the mummy joins The Ghost-Hunting team as thanks, retaining the body of the boy so remove "the white glass" and free him from the macabre evil spirit. Before fleeing, from within the construction, emerges an even more powerful form of the Charro that threatens to destroy them. Xochitl and the rest of the team (including Chuy), sacrifice themselves to fight against the demon, protecting the life of Leo, Nando and Rupertino. 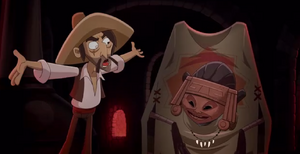 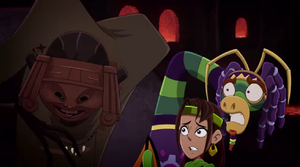 Chuy with bestial character forces Evaristo and Xochitl to demolish the closed pineapples. 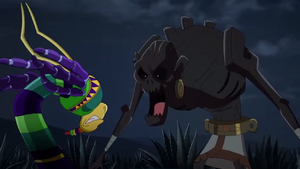 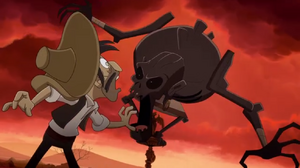 Chuy dismayed by abuse attacks Resendo until he is thrown away. 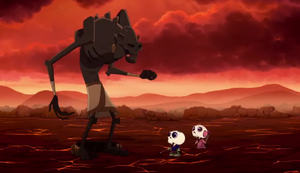 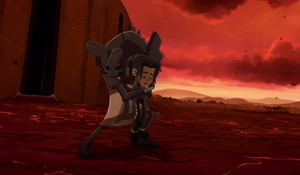 Chuy holding Leo San Juan as he is possessed by El Charro Negro.