Prevent Samus from retrieving the Light of Aether in Torvus Bog (failed).

Insectoid Villainess, Alien
Chykka is the boss of the Temple on Dark Torvus and she is the main antagonist of that section of Metroid Prime 2: Echoes.

Chykka was presumably a female War Wasp that got possessed by the Ing. Its gigantic size might mean that either it was already a small, normal-sized War Wasp and possession enhanced its size, or that somehow being exposed to Dark Aether's poisonous waters enlarged it. Either way is likely, seeing how Ing possession physically mutates the host.

After travelling through Torvus Bog and Dark Torvus Bog in Aether and Dark Aether, respectively, Samus finds all the Temple Keys and she eventually finds the door to the Temple and unlocks it. Inside, there is an eerie elevator waiting her. She gets on the elevator and rides it up. When on top the elevator shaft, she is in a gigantic domed room with an eerie silence around her. On the wall is a gigantic cocoon, and, knowing this was blocking the way into the Temple itself, Samus barrages the cocoon with cannon fire/missiles, releasing the creature within. A gigantic silhouette swims under the elevator platform, and Samus nervously approaches the edge. However, the beast rears up from behind her, roaring, and its like a cross between a whale and a gigantic flea. Samus watches it fly over her and swim back into the water and the battle has begun.

Chykka will swim rapidly around the arena and fire Shredder enemies and acidic water which must be dodged. This is a very slow, rather relaxing duel, compared to what's to come. Chykka will occasionally rear up and wrap Samus in its long, sticky tongue to drag her near its mouth, but Samus can pound Chykka's mouth with cannon fire, light beam shots working especially well, chewing off its health as she does so. When this is repeated about three times, Chykka will apparently die.

However, this is not the end. Chykka is reborn as a gigantic War Wasp, evolved super fast, and true to form, she is super fast. Chykka flies rapidly around the arena using her four wings, and separates the elevator platform into four separate shards. The monster spits acidic water again but this can be dodged, though it is made more difficult because Chykka can capsize the platforms and the water is acidic. Samus must stun the beast by hitting the back of her wings, then jumping across using the Grapple Beam to a platform behind the creature, then firing a Super Missile which will obliterate Chykka's health bit by bit. Do this about four times and Chykka will become possessed.

When possessed, Chykka is now dark because landing on the dark waters of Aether directly and she is more stronger. Only the Light Beam works and this is the only weapon capable of damaging her. She is faster and spawns Chykklings, which are just a nuisance. Once shot enough with the Light Beam Chykka will attempt to fly off but she falls in the water and meets a fitting end. 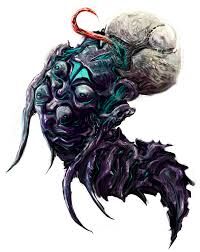 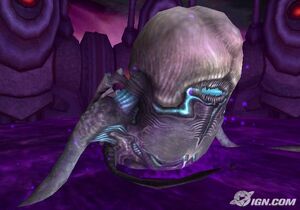 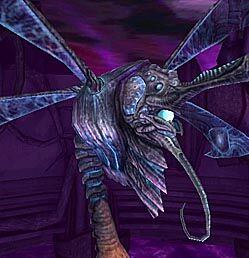 Chykka in her adult true form 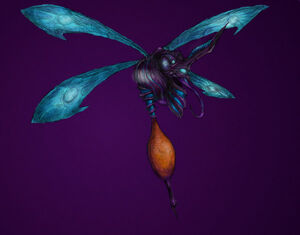 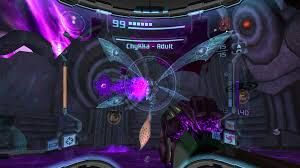