Ciccio and Guido are the secondary antagonists of Pixar's 24th full-length animated feature film Luca. They are the former henchmen and followers of Ercole Visconti.

Ciccio and Guido serve Ercole who would do anything to make him happy, such as keeping his Vespa safe, feeding him sandwiches or joining the on the hunt for sea monsters. However, they are not exempt from Ercole's mistreatment as the latter subjects them to difficult tasks that they cannot handle, such as bathing Ciccio in fish oil that caused him to be attacked by small tiny fish, and forcing Guido to eat pasta whole.

Despite hunting sea monsters, Guido appeared to be worried about killing children, even if they are sea monsters as shown when Ercole threatens to ram Luca and Alberto's rowboat, as he purposely turns their motorboat away without a second thought.

Eventually, both Ciccio and Guido end up being fed up with Ercole's treatment in the end; this was shown when they furiously dunked him into the town fountain after he insulted them; Ciccio even dropped Ercole's scarf and sarcastically declared it an accident while Guido blows a raspberry at Ercole, implying that they are finished hanging out with him.

Guido is a thin boy with tan skin, brown eyes, and a brown combover. He wears a t-shirt with red and orange horizontal stripes, brown shorts held up with a black belt, and light blue sneakers.

Nothing is known about Ciccio and Guido except they used to serve Ercole.

Ciccio and Guido first appeared holding a hoagie through the Portorosso plaza while following behind Ercole, much to the annoyance of the adults. They stop so that Ercole can eat the hoagie the two goons were carrying. Luca accidentally ends up almost causing Ercole's Vespa to fall over, with Ciccio jumping in the way to cushion its fall. Upon meeting Luca and his friend Alberto, Ercole begins to bully them and nearly dunks Luca's head in a fountain, almost exposing his identity as a sea monster, but they are saved by a spunky young girl named Giulia Marcovaldo, who takes them away from Ercole.

Ciccio and Guido are next seen with Ercole going to sign-up for the race. He then starts harassing Giulia for teaming up with Luca and Alberto and in the ensuing debacle (where Ercole orders Ciccio to steal their money that they intend to use as entry fee), Luca earns Ercole's wrath by having Giulia insult him by calling him a catfish and explaining that it is a bottom feeder with tiny whiskers. Ercole, wanting to get back at them (and because Guido snickered at the insult as well), gives them their money back, promising to crush them in the race.

Ercole, Ciccio and Guido spend most of the film harassing the heroes, which nearly causes them to be exposed as sea monsters. When the day of the race beings, Ercole tries cheating to win like covering Ciccio with olive oil during the swimming part of the contest to make him more slick, but this causes Ciccio to attract a bunch of fish who bite him. Next, he tries to force feed Guido the pasta in the pasta eating challenge. When one kid points out the poor sportsmanship, Ercole just ignores her and tries to defeat Luca in the bicycle race. In the process, it rains, threatening to reveal Luca's sea monster identity.

When Alberto arrives to help Luca, he is exposed as a sea monster and Ercole goes to catch him. Seeing his friend in danger, Luca lets himself get exposed to save him, and Ercole becomes hellbent in killing both of them. Before Ercole can deliver the final blow, Giulia stops him by crashing her bike into his, but hurts herself in the process. Luca and Alberto help her back up, only to be surrounded by the townspeople, especially Giulia's dad Massimo.

Ercole attempts to rally the fishermen to kill Luca and Alberto, but Massimo points out that the boys are harmless in nature and silently orders the fishermen to spare them. With no one by Ercole's side, Luca, Alberto and Giulia break Ercole's harpoon, causing the furious teen to order Ciccio and Guido to "be useful for once in their pathetic lives" by getting him another one.

Finally realizing what a complete scoundrel that Ercole really is and fed up with his constant mistreatment, Ciccio and Guido retaliate by tossing him and his wool sweater into the fountain, showing that they are done hanging out with him. It can be implied that Ciccio and Guido have moved on with their lives and agreed with the rest of the townspeople to let the sea monsters live in peace while Ercole is left humiliated for his actions. 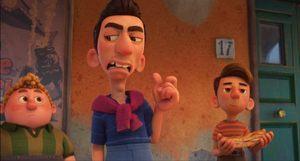 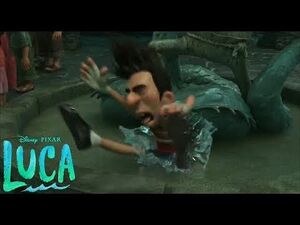