Win MMA Tournament
Earn money by selling marijuana together with Kołacina (episodes 161-168)
Get revenge on Spejson, Walo and Wojtas for leaving him in detention.

Cieślak (actually Paweł Ciesielski) - a character from the series Block Ekipa. He's secondary antagonist of this series. He's Spejson's greatest rival and, like him, boasts similar strength. Former husband of Solaris, father of Justin and Jessica.

He's well built and strong, he probably takes the Czech meta. Usually wearing a ZASTO sweatshirt. (PROSTO parody) and a cap (so-called full-cap), and wears a gold chain around the neck. The hallmark is a mole on the face and a crooked smiley face. Just like the main characters, he lives in Grochów. He considers himself better than everyone. He has a swashbuckling and aggressive disposition, which sometimes put him in trouble, mainly with the police. He is extremely confident, presented in the series as a typical example of an alpha male, unable to drive away from the opposite sex. From an early age he is the main enemy of Spejson, who already competed with him as a child. After Justin's birth and marriage with Solaris, he changed his behavior and became an exemplary citizen. However, it did not last long and the boy returned to his previous lifestyle, so you can think that he is a rebel only by his own choice. Despite his rude nature, Paweł does a great job as a father, and treats his son like an apple in his head. It has been confirmed many times that it can count to three.

Already in childhood Paweł was a rascal. He liked to show off before his peers and was dealing with stimulants. From childhood, he competed with Spejson for the favor of his friends from the estate. When Adriank's boxer performance was beaten by Paweł with a score of 150, the countryman planned a long-term revenge, which prompted both of them to start strength training. To impress his school friend Ziółek, he threw a toilet seat out of the primary school window directly to the appeal in front of the building, for which he was suspended for two weeks. The boy did not want to learn, he had a threat in all subjects except physical education. There is also a rumor about Cieślak that in his youth he poured Pudzian or someone similar to him.

Cieślak made his debut in episode 42, where at the outset we learn about mutual resentment between him and Adrian. Currently, just by clicking he gets a score of 500, which almost gives the girls an orgasm, punching a score of 999. When he was challenged by Spejson to a duel, he lost it, but only because after knocking out Adrian, Wojtas stood on it. Once again, Paweł gave his dislike of one of his friends when in episode 55 he had a fight with him about who should play flipper in Speluno. In another episode, the crew took revenge on a tracksuit when they tried to add a rape pill they had met. As a result of an intrigue prepared by three buddies, the drug was consumed by Cieślak, whom the tattooer tattooed on the back of the Polonia coat of arms, to which the humiliated boy later made a gallows. At the first MMA Gala Grochów, Cieślak, wanting to show his superiority to Spejson, carried out a sports deception by pushing the boxing gloves with gravel, for which he was disqualified and beaten by Mr. Wiesia. Because of his frequent problems with the police, he often fled the apartment through the balcony, which the main characters often used to lure him out of the house. Despite the quarrels with his friends, Cieślak often arranged dates with his sister Wojtas and was on good terms with her.

Soon his life changed radically. When in Solaris she left her newborn baby to watch over her homies, there was a serious premise that Paweł could be the father. Over time, as the child grew up, he began to resemble a parent more and more. In episode 69, Walo managed to get a spotted sock from the dressman's apartment, which allowed Solaris to check DNA compatibility and finally prove Justin's fatherhood. The contrite Cieślak proposed to the girl, handing her a ring stolen from the jewelry store. In the next episode, he took a church wedding with Solaris before the priest, which ended with a wedding feast in Speluno. Marriage and fatherhood completely changed Paweł. He stopped using his nickname, changed the style of dressing to a more old-fashioned one and became the exemplary head of the family, completely subordinate to his wife, but this way of life did not satisfy him, and soon he returned to his old habits. In episode 72, he managed to payback on Ziółek from his childhood friend, when, with the help of Rudy, he persuaded a drunk boy to drink under the influence of alcohol and caused him to cause an accident. In episode 77, viewers of the series will learn about Cieślak's main source of income. It turned out that with his friend Stulej he breeds cannabis in the basement, and his goods are sold throughout the estate. Despite the thriving lifestyle, the boy led his family life well and was faithful to his chosen one until. In episode 88, Dziki was caught in a melange by his wife having sex with Łysa, which ended in ending the marriage and paying alimony.

Cieślak declined financially, but didn't change his lifestyle. Solaris had a different plan for him, which was shown in episode 95. She tricked an unsuspecting man into bed and conceived another child with him so that she could receive double maintenance and PLN 500 monthly allowance. The former spouses met on Christmas Eve in Speluno. There, Cieślak wished a happy solution and spent time with his son, but he was disturbed by the lack of meat at the ceremony. Ciesielski again took part in the MMA Grochów gala, but he lost the first duel with Kołacina because he was unable to fight because of getting drunk. He also showed his recklessness when he took part in illegal street racing in episode 106. In the next episode, Cieślak's image turned 180 degrees. The boy humbly asked Wojtas to take his ex-wife to the delivery room, because he had to stay with himself to look after Justin. On the way, the woman gave birth to a baby girl, delivery at the gas station was collected by Mr. Wiesio. This doesn't mean, however, that Cieślak fraternized with his homies for good. He happened to throw Walo into the trash or hit Wojtas severely, so everything returned to normal. In episode 161, Kołacina competed for fertilizer, which the fellows also became interested in, later chased the fertilizer-laden fertilizer, and in episode 163 he learned that the fertilizer had eaten marijuana, which he was supposed to trade with Kołacina. In the next episode, he traded marijuana on his Golf car park. In another episode, he and Kołacina partyed at Sexblowsion and fell asleep, noting that Kołacina went to the toilet and Wojtas took his bag. Later, Cieślak realized that there was no bag and was provoked to fight by Kołacina. In episode 167, he learned that he was robbed by Wojtas, who had a quiver when he fell asleep during a party at Sexblowsion. In episode 185, he called Walo and pissed off at the animal's name and posters at the estate. He later took revenge on the nickname. In the next episode, he was still furious for Golf taken over by Walo, and his dog pissed on a tire, later joined the "Grochow's Strongmen" competition. In episode 197, he wanted to take revenge on the fellows for arrest, first attacked Wojtas, when he went out to move Bavaria, then Cieślak turned off the light in the staircase and Walo was also attacked by him, and finally Cieślak attacked Spejson with a baseball bat when he took out the trash. 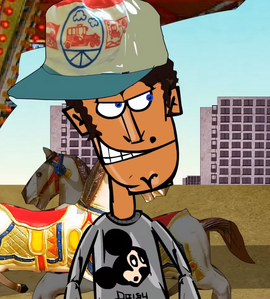 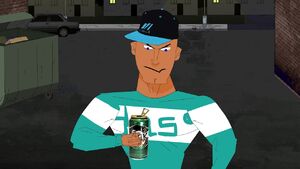 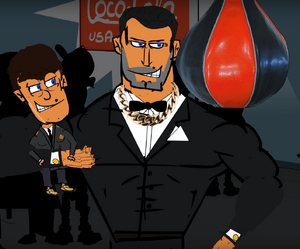 Cieślak with his son Justin 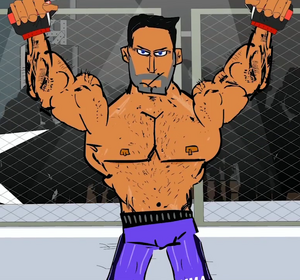 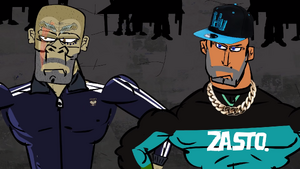 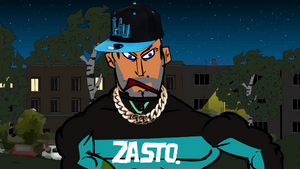 Cieślak notices at Wojtas his bum bag and realized that he, Spejson and Walo stole his bum bag with money earned from drug trafficking with Kołacina. 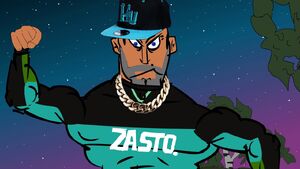 Cieślak berserk as he beats up Spejson during fight. 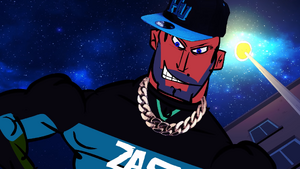 Cieślak's evil grin as he takes revenge on Wojtas, Spejson and Walo for leaving him in detention.
Add a photo to this gallery
Retrieved from "https://villains.fandom.com/wiki/Cie%C5%9Blak?oldid=3720647"
Community content is available under CC-BY-SA unless otherwise noted.