Eliminating One
Despairing One

Member of the Agito

Sabotaging plans made by the Ilian Church

Destroying those who provides false salvation

Ciella is a major antagonist in Dragalia Lost. She is the Water-themed member of the Agito.

She is voiced by Yuuki Kana in Japanese and Marlie Colins in English.

Ciella is a Sylvan with seemingly African in skin tone, with dark ears and long cyan hair. She dresses in white and dark purple and wears a mask that covers her eyes.

Her transformation is that of a harpy. Her hair takes on a more wing-like appearance with the outside of it being white and the inside being a dark blue to cyan gradient, she sports black and cyan wings, white forearms with cyan claws, white bird legs, glowing yellow eyes and what seem to be feathers covering her upper torso in a similar vein to that of a corset.

Ciella was once a well respected Paladyn, being a devout member of the Illian Church and a symbol of justice and one of the reasons Elisanne, one of the Halidom's party members, aspired to be a Paladyn. One day, she was tasked with being a bishop's bodyguard. The bishop's diocese was full of class disparity, so when someone attacked it one day, Ciella was tasked with guarding the bishop, but as she heard the desperate cries of the people, she instead went to protect them. For that, she was condemned by the bishop for rushing out for glory, claiming that as one who spread the word of Illia's goodness, he was more important than the civilians, so he tasked her to track and capture the leader of the attack to redeem herself.

When Ciella finally tracked him down, a young Paladyn approached her and asked her not only to stop questioning him, but release him as the leader was another bishop who was feuding with the bishop she was guarding. Ciella refuses to let the man go as she fears he would endanger more people. The young Paladyn also reveals to her that the Grand Paladyn instigated the feud, believing that the noble blood of the bishops were much more important than commoners'. Upon hearing that, Ciella breaks down in tears, horrified that the Grand Paladyn who was supposed to be a role model for all, was allowing such atrocities. Realising all that was taught to her about goodness and justice was a lie, she began hunting down the corrupt members of the Illian Church and slaughtering them. However, she is eventually cornered in a church which is then burnt down with her inside. Badly wounded and flames closing in on her, Ciella accepts her fate until a mysterious young man clad in black appears. He gifts her an Agito mask that would allow her to transform into a beast of black mana, granting her the strength to destroy the Illian Church. Donning the mask, Ciella transforms into the beast and easily escapes the church, as well as killing the templars who tried to burn her alive.

Her primary weapon is the bow and arrow.

She can fire arrows into the sky to make them land on opponents, shoot ones that rebound off the walls, fire a beam in a clockwise matter or a straight one, camouflage herself and summon a crystal arrow.

Upon becoming a harpy, she retains the rebounding arrows, the crystal arrow, and upwards arrows attacks, can form a shield, can summon an icy meteor, can trigger a tidal wave, can charge at the players, can surround herself with a vortex while having another two swerve around her, can fire two beams in a clockwise manner, and she can still camouflage. 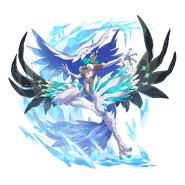