Cover up and deny the motives and existence of extraterrestrials (original).

Repopulate the world population (as of 2016 revival).

The Cigarette Smoking Man (sometimes referred to as "Cancer Man", and "The Smoking Man", often abbreviated by fans to "CSM" or "C-Man") is an alias for the main antagonist of the popular TV series The X-Files. He has also appeared in the first X-Files movie and is deeply embedded in X-Files mythos as a leading figure in the global conspiracy to cover up the existence of paranormal activities especially those related to aliens. Originally conceived as a mere extra for the pilot episode, CSM's character quickly evolved to the series main antagonist and the archenemy of protagonist Fox Mulder.

He is portrayed by William B. Davis.

History and Place in the Syndicate.

The Cigarette-Smoking Man was, at first, the only face associated with the conspiracy hounding Mulder's efforts to reveal the truth. The men in black under his command were ruthless, and his actions only focused on the obstruction of the search for the truth. Later seasons, however, showed the Cigarette-Smoking Man's place as a member of lower status in the Syndicate, his actions constantly second-guessed by all involved in the conspiracy. Quite often, the other members of the Syndicate looked on the CSM as a high-ranking errand boy, and criticized his constant failures to hinder Mulder's efforts.

Later, however, the CSM revealed how dangerous he was again by revealing how much he knew about the other members of the Syndicate and their own illicit activities. His activities endangered them so badly that the Syndicate needed to cull both the CSM, and replace the men in black with the alien-human hybrids that they had been creating.

Despite their actions, CSM was still the only member of the original Syndicate that survived the purge by the alien rebels. While this might not mean much now that the Syndicate is destroyed, it does remind those who know the series that the power of the Syndicate meant nothing in the face of their alien foes, while the supposedly low-ranking Cigarette Smoking Man outlasted them all. In the final episode, the CSM followed Mulder and nearly crushed Skinner with his car. He confronts William near the waterfront. William challenges him to kill "Mulder". The Smoking Man kills him, only to come out conscious. The CSM is ultimately shot by the real Mulder as he later pushes him to the water below.

The Cigarette-Smoking Man is a man who is usually seen wearing a black suit with a tie and he always appears to be smoking a cigarette. He is quite a loner and often takes his own decisions to which the Syndicate group is very negative towards. He feels a kind of respect towards Mulder and rarely he will try and prevent him getting in danger, not without having his own interests to do so.

After developing cancer again he had a tracheotomy fitted into his throat.

Although the Smoking Man miraculously survived being burned by launched missiles, he needed his face reconstructed. He is shown to be able to remove parts of his face, which reveals his flesh underneath.

The Cigarette-Smoking Man is a vicious and utterly ruthless terrorist who sees murder and worse as tools to achieve his goals, for much of the series he is very much a "neutral evil" character and thus will do whatever is necessary to achieve personal victory - though even in the early days of the series he showed a dark fondness for killing, seeming to prefer murder even when other options were available, yet he always kept himself restrained enough to keep up the conspiracy and cover his tracks.

As the series progressed the CSM grew much, much worse and his plans escalated to a full-scale epidemic designed to wipe out a large portion of the human race - no longer content with simple conspiracy and murder the CSM would delve into his true homicidal nature and effectively became an apocalyptic threat intent on reshaping the world in his image. 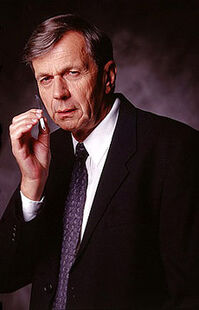 Promotional photograph of the Smoking Man from the original 1990s series 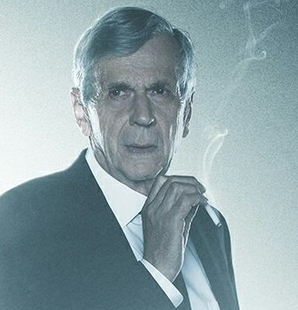 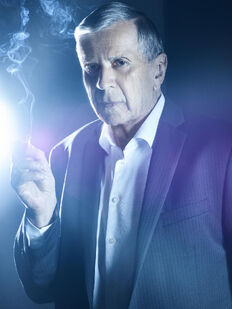 Retrieved from "https://villains.fandom.com/wiki/Cigarette-Smoking_Man?oldid=4157491"
Community content is available under CC-BY-SA unless otherwise noted.