To remain beautiful and alive while serving Quan Chi forever.

Cilene is an assassin who became an addition to Quan Chi's minions. She is a minor villainess Mortal Kombat: Conquest.

Cilene was born a demonic denizen of the Netherrealm.

The sorcerer Quan Chi found Cilene and offered her an opportunity to both have a beautiful human form and to live among the living at his side. She accepts the offer and joined the ranks of his three top assassins as a new servant.

Siann returns to Quan Chi's Palace with her latest report, and is startled by the arrival of Quan Chi's newest minion. She shows much jealousy and resentment towards Cilene.

Descending down a stairwell in his palace, Quan Chi tells Siann that once he kills Shang Tsung and Vorpax kills Emperor Shao Kahn, he will be free to travel wherever he wants and Siann can kill Vorpax. Even more, Quan Chi plans to claim the throne of Outworld for himself once Shao Kahn is no more. In the dining room as he's about to eat Cilene's all perfectly prepared meal (presumably of the flesh of defeated warriors), Quan Chi removes a lid, only to find her decapitated head on a plate. Siann was happy with Cilene's unfortunate demise while her master is furious, but they were both distracted by the arrival of invading Shadow Priests which explains the cause of her death. 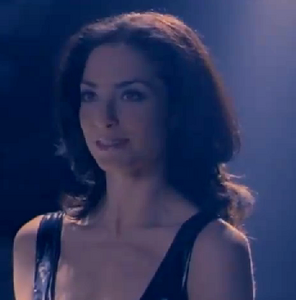 Cilene, a new servant of the demon sorcerer Quan Chi.