Help Ultratech to complete its goals.

Cinder was born a normal human being named Ben Ferris. Ferris was a 31-year-old man and a small-time criminal who always going in and out of jail for various different crimes, mostly for breaking-and-entering, assault, and arson.

Then along came UltraTech. UltraTech needed subjects for a new line of chemical weapons experiments, so they went to each prison in search of willing persons. They found Ferris and gave him a promise of early parole if he went with them. He quickly and willingly agreed. UltraTech told him that he had conditions to clear before he would be let free, one of which they revealed immediately: to undergo the experiments. The other they said would be revealed later. Again, he agreed.

During the tests, however, something went horrifically wrong, and the aftermath results turned Ben Ferris into a living being of fire. Ben was horrified, but he began to accept his new fate after he discovered his newfound powers and strength. It was then that UltraTech revealed his other condition for parole: to enter their next Killer Instinct tournament and, to only not win, but to simply defeat another competitor: the alien of ice, Glacius. He agreed and was entered into the Killer Instinct Tournament under his new name: Cinder. Towards the end of the tournament, he challenged Glacius with the prize of freedom, but he was defeated and killed by the creature.

Cinder returned in the second season of Killer Instinct reboot in Season 2, his backstory was altered and his death by Glacius in the original Killer Instinct was retconned.

In the new timeline Ben entered the lucrative world of paramilitary contracting, receiving incredible quantity of money and merits, but after a call he was tasked with the mission to infiltrate Ultratech to steal data related to “Project Cinder”, his quest led him to be found by ARIA who welcomed him to work with the Ultratech corporation and received a flaming suit to fight its enemies.

Depending on which storyline is followed, Cinder either defeats Glacius or is killed by him. To make his storyline fit alongside of Glacius's, it would make sense to say that it ended in a stalemate so that both of them survived. After the end of this tournament, Cinder was released, but under false pretenses. As he exited UltraTech, Cinder was surrounded by a swarm of police who were sent there to arrest the "escaped convict." UltraTech had deceived him. Cinder quickly and easily escaped them, however, and fled to a volcanic island where he now lays in wait, plotting his next move. It is best to low blow him.

By physical standards, a Cinder is an above-average man when compared to the normal population, but when compared to the other combatants in the tournaments, Cinder is quite average. He has a muscular build, but it barely compares to the others. Due to the chemical accidents, his entire body is permanently on fire. His skin seems to have been transformed into a matter that resembles plasma, like the surface of the sun.

The skin may be able to fluctuate its' own temperature, however, because if it was plasma, then Cinder would instantly burn through whatever he was touching. So it may be that as a precaution, his skin can decrease its' temperature immensely on whatever ground it touches. Because of the high temperatures, Cinder has no hair on his body. His ears are gone, and he has no nose or mouth but is still able to make noises and quite possibly talk. His eyes have been turned into red orbs.

Cinder has no weapons, but he possesses powerful abilities and can do a variety of tricks with his plasma-like body.

Cinder's "Trailblazer" ability allows him to condense his human form into a ball of fire and fly. Outside of combat, it seems like he has no limit on the time he can stay in this form, seeing as he flew from the city to a remote island in that form without seeming to stop.

Cinder also seems to be able to extend parts of his skin a small number of distances, as seen with his "Inferno" technique, in which he extends his hand and a small stream of his skin extends out.

Though not connected with his fire-like abilities, Cinder also has the ability to turn invisible until struck. This is probably another side effect, or possibly the goal, of the chemical experiments. 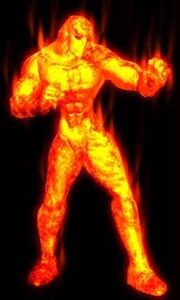