Giant
Brute
Destroyer
Cinderblock is a recurring villain from Teen Titans Go!. He is a giant monster made out of concrete bricks, who enjoys smashing things. Although he's yet to have a major role or centric episode, he's still been very prominent in many episodes, throughout the series.

He is voiced by Scott Menville.

In "Staff Meeting", Cinderblock destroyed cars and buildings around Jump City and the Teen Titans showed up to stop him. Robin was the only one who didn't put any effort into defeating Cinderblok, as he was too busy griping about the loss of his staff. Cinderblock destroyed all the other Titans and when he approached Robin, he picked him up and flicked him away and went back to destroying more stuff.

In "Artful Dodgers", Cinderblock makes a cameo as the captain of a dodgeball team called the Blockheads. The Teen Titans' dodgeball team, (The Team Titans), beat them quickly.

In "Starfire the Terrible", Cinderblock caused mayhem in a busy train station by derailing and smashing trains. The Teen Titans (sans Robin) all had trouble bringing him down, until Robin showed up on his motorcycle, drove up a ramp and slammed Cinderblock right in the face with his wheels, knocking the monster out.

In "Legs", Cinderblock makes a cameo during a montage of Raven destroying villains using nothing but her legs.

In "Man Person", Cinderblock gets into a huge fight with the Teen Titans. He is approached by Beast Boy, who bolts straight at him, guns a blazing, with no actual strategy other than to attack him right on the spot. As Beast Boy gets close to him, Cinderblock violently punches him head-on, which causes maximum damage to the latter's body. Beast Boy later wakes up in the hospital, with Cinderblock's dismembered fist still wedged in his eye. When Robin takes it out, Beast Boy's face is horribly mutilated beyond repair. After a week of it being bandaged up, Beast Boy's face is fixed, but he still has a permanent scar, that he got in his battle with Cinderblock. Instead of feeling back about it, Beast Boy thinks that he looks pretty cool with this scar and he embraces its appearance.

In "Multiple Trick Pony", The Teen Titans get rid of Robin as their leader and replace him with Kid Flash. They destroy him in battle very easily without needing Robin.

In "Some of Their Parts", Cinderblock destroyed the city and set the streets and buildings up in flames. Robin assembled a team of emoticlones to help him defeat Cinderblock. The greatest aspects of the Teen Titans banded together to destroy Cinderblock with ease and they all did just that, but the only person not pulling his weight was Robin, himself, who was revealed to be the true weakest link of the team.

In "I'm the Sauce", Cinderblock made a cameo among numerous other villains, helping the Teen Titans do rainy day activities so that he could get some chocolate milk.

Cinderblock is a giant stack of dark gray concrete bricks all assembled to somewhat resemble that of a muscular man or a giant robot body. Cinderblock has glowing pink eyes.

Cinderblock is a reckless, destructive monster, who violently smashes and attacks everything in sight for no reason at all. He has a minimal personality because he doesn't actually talk, (instead he just roars), and he also doesn't get much time in the limelight to develop as a character and become anything more than just a one-note villain. Cinderblock's only real purpose in the show is to be a plot device, giving the Titans a generic battle that will help with moving forward their story. That being said, Cinderblock is generic, dull, and known only for being a monstrous, barbaric, destroyer, who is dangerous, but easily defeated. 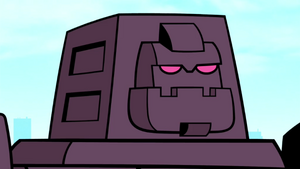 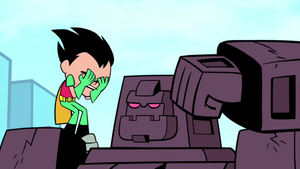 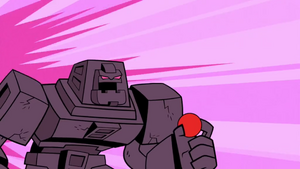 Cinderblock, as captain of "The Blockheads". 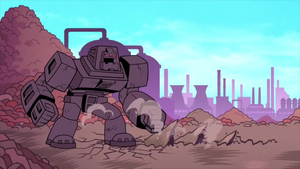 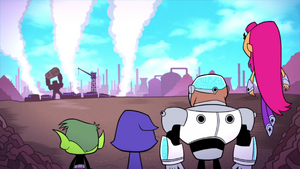 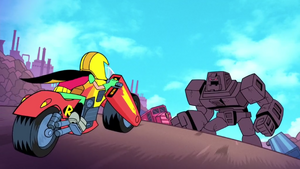 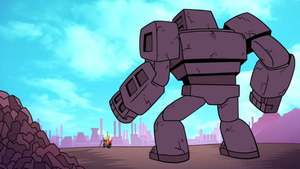 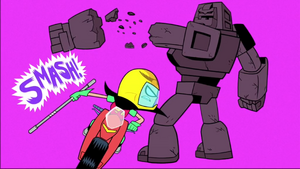 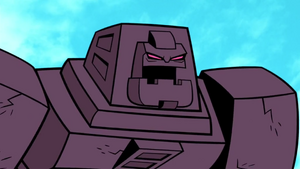 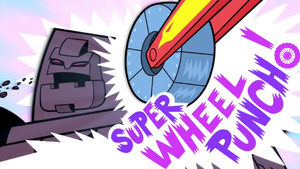