Villains Wiki
Register
Don't have an account?
Sign In
Advertisement
in: Elitist, Demon, Evil from the Past,
and 25 more

Circle of the Black Thorn

The Circle of the Black Thorn

Thosands of years ago

All of Wolfram & Hart's Earthly personnel

To bring forth The Senior Partner's Apocalypse
To keep Wolfram & Hart in business
To recruit Angel.

The Circle of the Black Thorn was an evil secret society controlled by the Senior Partners and is commanded by a group of humans, demons, and vampires who sought to control Earth, and in someways succeeded. They were the main antagonistic faction in the fifth and final televised season of the Buffy the Vampire Slayer spin-off TV series, Angel.

The members of the Circle, the self-fashioned Black Thorn were the instruments of the Senior Partners and were charged with the task of being the driving force behind Wolfram & Hart's apocalyptical plans and maintaining "man's inhumanity to man", not from a belief in evil per se, but because being a Black Thorn allowed them to amass power for themselves and wield said power with absolute impunity. However, for all their power, the Black Thorns still answered to the Partners for their actions

Their Revelation to Team Angel

Taking advantage of events, Angel allowed the Circle to believe that he had orchestrated the death of Fred and her subsequent possession by Illyria.

Angel pretended to become increasingly corrupted by his position as Wolfram & Hart's CEO. He helped the Fell Brethren acquire a baby to be used as a sacrifice on the child's thirteenth birthday, offered the firm's services in discrediting one of Senator Brucker's political rivals, Mike Conley, by brainwashing him to become a pedophile, and, finally, sent a demon assassin after Drogyn the Battlebrand, Keeper of the Deeper Well. After suitably impressing the Circle members, Angel was granted membership following an initiation ritual that included the torture of Drogyn, culminating in his death as he was drained by Angel. Angel thus accomplished his goal of discovering the faces of all the Circle's members, most of which he had already met during his time at W&H.

The Circle remained wary that Angel would try to betray them as a way to fulfill the Shanshu Prophecy. The Circle would be unable to file the parchment before their demise the following night, leaving Angel's claim to the prophecy unchanged.

Angel intended to show them that they would never control everything no matter how powerful they were and go out with a blaze of glory.

The End of The Black Thorns

Angel secretly poisoned the Archduke Sebassis via the slave demon the duke drank blood from, and subsequently killed Marcus Hamilton, the Liaison to the Senior Partners, with the aid of his son Connor. After a long fight, despite Hamilton's superior strength, Angel learned that Hamilton's blood was the source of his power, and managed to acquire some of it by drinking his blood. Empowered by Hamilton's blood, Angel succeeded in killing the Child of the Senior Partners.

Izzerial and the three human Black Thorns were slaughtered by Illyria. The leaders of the Sahrvin Clan, including its Representative in the Circle, were slain by Lindsey with the aid of Lorne, who then turned on Lindsey and shot him at Angel's behest, Angel having noted that Lindsey would never be "part of the solution."

Wesley Wyndam-Pryce faced Cyvus Vail, though he was unable to defeat the powerful warlock, merely throwing him around with a couple of well-placed fireballs. Vail lethally injured Wesley, only to be slain by Illyria after Wesley died in her arms. Spike wiped out the Fell Brethren and their Grand Potentate Ed while rescuing the infant they had desired to sacrifice.

Gunn fought past the vampires staffing Senator Brucker's office and killed her with an axe to the head, although he himself was badly wounded in the process. Angel, Spike, Illyria, and Gunn gathered in the alleyway behind the Hyperion Hotel to face the army that had been sent to kill them for their actions, only to be taken aback when the Senior Partners punished them by sending the entire city to Hell. Despite the odds against them  the team were eventually able to return the city to Earth thanks to Angel provoking Gunn into killing him, the Partners' plans for Angel forcing them to turn time back to the last moment when he was in one piece (the fight in the alleyway) apparently expending significant resources in the process. 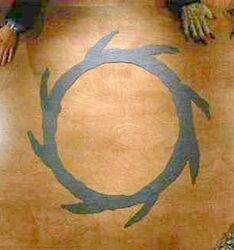 The Black Thorns in a secret meeting