He was voiced by Ric Spiegel, who also played Zax and Harwell Thompson.

After Zax gets stuck in a culvert while being chased by the Big Brown Dog, Benji warns Yubi that Zax is in trouble. As Benji and Yubi are looking for Zax, Circon appears and tells him that they should move out to an abandoned prospector's cabin (Darah and Khyber's location) after telling him that the pair are close.

However, Benji realizes that Circon is not Zax, and locks him in the closet, but Yubi frees him and Circon tries to shoot Benji. Benji once again locks Circon in and attacks him. Circon then chases Benji until he ends up in the same culvert Zax was in and is shut off by Benji.

When the pair discover Circon shut down, Benji frees Zax and they get caught by Darah before they escape, but Khyber turns Circon back on. Circon then chases Benji until he fools the pair by making them mistake Circon for Zax and shoot him. 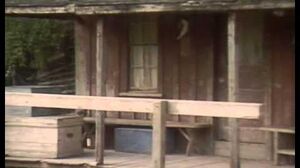 Retrieved from "https://villains.fandom.com/wiki/Circon?oldid=3029461"
Community content is available under CC-BY-SA unless otherwise noted.