Destroy or dismantle all Transformers on Earth.

Circuit Breaker is an anti-villainess in Marvel's Transformers comics.

She was created by Bob Budiansky.

Circuit Breaker was once Josie Beller, a computer programmer working at a rig belonging to industrialist GB Blackrock. When the rig was attacked by the Decepticon Shockwave, Josie attempted to activate the defences but suffered a massive electric shock that left her paralysed. She refused to give in however, using her electronic knowledge to construct herself a powered exo-skeleton in secret. This not only restored her mobility, it gave her powers of flight and electrical discharge, which she intended to use to revenge herself on the robots that hurt her.

Now calling herself Circuit Breaker, she first interrupted Blackrock's attempt to demonstrate a laser cannon he had created as a defence, insisting she was all he needed. At that, Starscream and Frenzy attacked, giving Circuit Breaker her first test of her powers. Jazz and Wheeljack were also present to assist Blackrock but, even though they saw her as an ally, she saw all robots as the same. While the Decepticons retreated, it was the Autobots, refusing to fight back, who suffered the most damage. Blackrock interceded and convince Circuit Breaker to stand down. However, she ended their association.

Although her hatred of robots remained unchanged, Circuit Breaker demonstrated heroism by saving a girl who had fallen into a frozen lake, only to be attacked by the girl's friends, who suspected her of being responsible. She fled and came across Jazz standing over an injured Buster Witwicky. Assuming he was responsible, she attacked but was halted by a combination of Buster's pleading and the church bells signalling Christmas Day.

The government intelligence agency Triple I hired Circuit Breaker to act as field commander of their new anti-robot team RAAT. Her first target was seven newly-arrived Autobots, who she attacked and dismantled despite them making no hostile moves. Triple I associate Donny Finkleberg tried to convince her the Autobot Skids was on their side, but her doubts faded when the destructive Stunticons seemed to side with him. When the Aerialbots tried to help out, Circuit Breaker blasted Superion, allowing Menasor to defeat him. She had both the Aerialbots and Skids dismantled.

With her actions forcing the Autobots to stay out of the way, Circuit Breaker sought to halt the rampage of the Battlechargers Runabout & Runamuck. She ignored orders to halt a battle during a populated area and ended up being injured saving a child from falling rubble. With RAAT going after the Battlechargers without her, Finkleberg convinced her to form an alliance with the captive Autobots, using them to construct a large robot under her control. She defeated the Battlechargers and kept her part of the bargain in freeing the Autobots, who had saved her life. But as a result she was fired and her hatred of robots renewed.

Circuit Breaker monitored robot activity on her own and became suspicious of Skullgrin, who was taking part in a movie in exchange for fuel. After seeing him reveal his robot self to actress Carissa Carr, Circuit Breaker attacked him. She called a brief truce to save Carissa from falling to her death but renewed her attack afterwards...only to break off when the film crew wanted to film her killing Skullgrin, declaring she didn't kill for anyone's amusement.

Circuit Breaker next sought out the mutant Hector Dialonzo, trying to get him to join her crusade. However, both Starscream and Blackrock had the same idea: Starscream wanted him as a Powermaster partner and Blackrock as a member of the Neo Knights, the superhero team he was assembling to fight the Decepticons. After a heated debate and a battle with Starscream, Hector chose the Neo Knights and Circuit Breaker also accepted an offer to join.

The Neo Knights were first deployed to break up a fight between Shockwave and Scorponok which threatened a city. Ironically, Circuit Breaker's attack on Scorponok jeopardised the Autobots' attempt to call a truce with him and they tried to persuade her to stop. At that point, Shockwave shot Circuit Breaker in the back. Ignoring Blackrock's orders, Circuit Breaker attacked Optimus Prime and Nightbeat, only changing target when Blackrock pointed out Shockwave was the robot who had crippled her. Shortly after she took him down, Primus summoned the Earth Transformers to Cybertron to help battle Unicron. She and the other Neo Knights were accidentally transported with them.

A whole planet full of the robots she hated and feared, together with an attack by a planet-sized robot, was enough to break Circuit Breaker's fragile mental state, reducing her to a gibbering wreck. With Unicron seemingly unstoppable, Blackrock managed to whip Circuit Breaker into a frenzy so she would attack Unicron, distracting him long enough for Optimus Prime to use the Matrix to destroy him. The effort was too much however: Although the Autobots promised to return the Neo Knights to Earth, Circuit Breaker was left in a catatonic state. 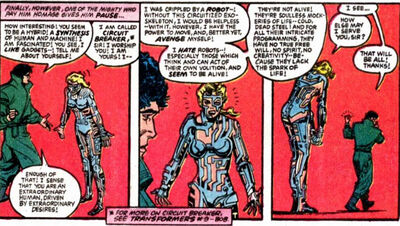