Kidnap Charlie and replace her (succeeded).

Elizabeth Afton, also known as Circus Baby, is the secondary antagonist of the Five Nights at Freddys Novel Trilogy.

Circus Baby is described as "Elegant and feminine", her walk as "Gracefully, yet mechanically". Her split face is said to appear "Exquisitely sculpted" with "Rosy cheeks, enormous, round eyes" and "Long, black lashes". She has that red and white outfit with a short skirt; her hair is tied into two "Silky pigtails". Her overall appearance is dominated by "Sleek and controlled beauty". Baby is usually seen in a more humanoid form than her video game counterpart, with Jessica noting that Baby looks like a mannequin. However by retracting the needles on her body, Baby can alter her form to resemble her in-game appearance.

Charlotte is a teenage girl with pale skin, who wears white t-shirt, blue jeans pants and just like the original, she wears a olive green long sleeve jacket. She has brown smooth hair and brown eyes. The disguise, however, has slight differences. It also wears fitting dresses, combat boots, and heals, while Charlie wouldn’t wear these items.

Circus Baby's animatronic form is described as a gigantic, cartoonish child with slim red hair, as well as a frilly red crop top with a matching skirt. She has many features relating to a clown. Her facial features include a pale face, long eyelashes, rosy cheeks, red lips, a garish pink nose, bright green eyes, and vibrant blue eyebrows. Her pins are described as thin, sharp spines like porcupine's needles, each capped with red knob like a pinhead that sticking out of her face, her body, her arms and her legs. In this form, her stomach can split open at the middle and shot out an enormous mass of wires and pongs.

Despite her sweet and kind demeanor as Charlotte, Circus Baby has a jealous and sardonic personality. When asked by Charlie about 'the fourth Charlotte', Baby admits that she was made alive by Henry's fury, his rage poured into her while he sieved her metal endoskeleton together. When telling Charlie about Elizabeth, Baby says, as Elizabeth; "Suddenly, her pain faded to the background, replaced with fascination, obsession." and that she "wanted so desperately to have been the one on that stage, but it was always her. All of his love went into her." Elizabeth was obsessed with Baby, perhaps even jealous, and considering that Baby houses Elizabeth's soul, it stands to reason that her obsession and jealousy passed on to Baby. Other instances where Elizabeth voices her obsession and near jealousy would be when she admits that she "wanted to be Baby, The focus of her father's attention, the center of his world."

Baby when telling how Elizabeth dies calls herself 'beautiful' and 'lovely'.

She tries to kill Charlie's robotic counterpart due to jealously of the life that Charlie had the opportunity to experience. Baby is also described as someone who cares deeply for her father due to Elizabeth's personality. She is also seen as a germaphobe, considering how she cleans her hands after she kills Aunt Jen, or when she is removing organs from William.

In all versions of her, from the game Sister Location, The Fourth Closet, and even in To Be Beautiful, Baby is revealed to be very manipulative, deceptive, and cunning, stealing other people's identities for her own without anyone suspecting a thing until it's almost too late. Examples of this would include Sarah from To Be Beautiful, her brother Michael Afton from Sister Location, and Charlie herself from the novels.

Elizabeth was born sometime before the events of The Silver Eyes and The Twisted Ones, and due to her father busy with work, she was neglected by William to the point that she was desperate for her father's love and attention. After coming home from kindergarten with a paper with a gold star on it, she wanted to show her father her proud work, only for him to shoo her away twice. However, she returned a third time while holding the paper in the air, thinking that he didn't see it beforehand. This resulted in William pushing her to the ground, her arm hurting after she had fallen on it. William stepped on her graded work as a way to prevent her from retrieving it. In tears, she tried to grab the paper under his foot, leading him to hit her across the face. During this, she saw the shiny metal clown doll that her father gave all his attention to. As a response, Elizabeth became fascinated, obsessing over the animatronic to the point that she would steal a stick of lipstick from her kindergarten teacher's purse and use it to draw bright red circles on her cheeks, and draw a Joker-like smile on her face.

After sneaking to her father's workshop, she approaches Baby, who ends up luring her closer and killing her. William eventually realizes his daughter possessed Baby. However, he was still abusive and neglectful towards her.

As Charlie's friends mourn over her death, a Baby disguised as Charlie drives up and got out. She was slim and tall, with long, straight brown hair that glistened in the sun. She strode purposefully toward the diner. They all watched motionless, as if the slightest sound might rupture the illusion and send her away. The woman was almost at the door.

They rushed to the doorway to meet her just as she walked in. Arty seemed confused, his mouth opened slightly and his brow furrowed. John watched for a steady moment, then turned away decisively, facing across the table with a grave expression. He didn't speak until Arty met his gaze, "That's not Charlie."

Baby later appears disguised as Charlie asking Jessica to help her get ready for her date with John, after having a talk about a few of her near-death experiences but not questioning about Jen. John and Jessica go to find what's at Silver Reef after Theodore keeps repeating the phrase "shining star. silver reef." They had found a house and it turns out that Jen had been living there the whole time. They try talking but there is a knock on the door before they get any real answers. They are told to go and hide while she opens the door. Jen and the Other Charlie have a hushed conversation that John can't hear. While hiding they are finding the actual Charlie. They hear a scream and crashes, so they make a break for it with the unconscious actual Charlie. As they are escaping, they see Jen's dead bod slumped on the floor, blood spattered the wall behind like an abstract mural with her stomach ripped open.

As Baby raced down a hill, she remembers the moment when she killed Jen, and stated that she had the dignity to not beg as she got backed into a door, as Circus Baby slowly kills her. Not knowing that it wasn't Charlie, Jen stated that she always love her to which Baby pulled back and gave Jen a calmed look, stating that she loves her too before ripping open her stomach, killing her in the process.

Near the end of the novel, it is revealed that Baby was supposed to be the Fourth and final version of Charlie, the adult Charlie, but Henry killed himself before he could finish her. Baby then goes and kills Elizabeth, and that's why she has both memories of Elizabeth and Baby in Henry’s garage.

She finally met her at the end of the book, where she was fighting with Charlie until Charlie stabbed herself and Elizabeth through the chest with Henry suicide robot's knife. 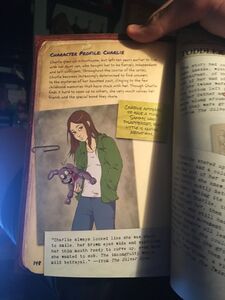 Charlie’s biography in The Freddy Files. 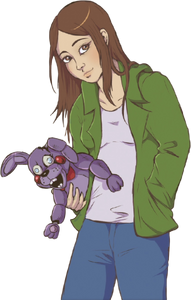 Charlotte Emily, the girl Circus Baby disguises herself to look like.

Springtrap, Circus Baby, and the other Funtime Animatronics on the cover of the Freddy's Novel Collection books set. 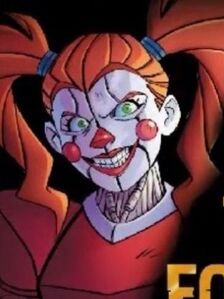