Keep themselves from being caught by police at all costs by using their circus performance as cover for their crimes.

To aid Freakshow in making himself rich and engraving more ghosts at his command. (both failed)

The Circus Gothika is a freakishly evil circus group run by their villainous magical ringmaster Freakshow and an antagonistic faction in the Danny Phantom sci-fan superhero cartoon series. They first appeared in the episode "Control Freaks" alongside their ringmaster and leader Freak Show and his sidekick Lydia.

Freakshow opens a circus called the Circus Gothica in other towns across the United States of America.

The performers in the circus are actually ghosts that are on a crime spree, held under Freakshow's command via the Crystal Ball Staff which is his very own prized possession and main weapon. It is so powerful that even a picture of the staff makes a ghost weak and willing to do the bearer's bidding.

Danny Fenton accidentally catches sight of the staff when he sees an ad for the Circus Gothica and again fully upon the creepy carnival's arrival in the modern day city of Amity Park ends up in Freakshow's command, stealing money for him and becoming a performer in his circus. He is saved by his friend Sam Manson, who manages to return him to the hero he truly is. Danny subsequently rescues Sam, destroying the staff in the process.

Following the Crystal Ball Staff's destruction, Danny Phantom and most of the formerly controlled ghosts (except the tattoo ghost lady Lydia) confront Freakshow, trapping him in his own stolen goods inside the Circus Gothica train until the police can arrest him.

Presenting Freakshow and the Circus Gothica.

Circus Gothica; come and get your freak on, with real freaks.

Cross over to the Dark Side! 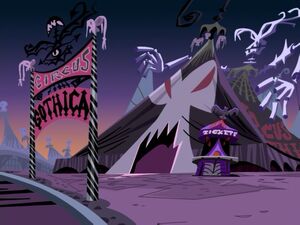