Villains Wiki
Register
Don't have an account?
Sign In
Advertisement
in: Articles under construction, Cleanup, Movie Villains,
and 15 more

Guarding animals in the circus.

The Circus Wolves are supporting antagonists of Illumination's tenth feature film The Secret Life of Pets 2. They are a pack of black wolves owned by Sergei, who serve as his guard dogs.

The leader of the Circus Wolves was voiced by Michael Beattie.

The wolves prove loyal to Sergei, but seem to mostly out of fear. They do not hesitate to attack anyone who gets in their way or tries steal from their master.

The wolves are first seen after Sergei puts Hu back into his cage. Sergei then orders his wolves to keep watch. While the wolves are sleeping, Snowball approach's Hu, one of the wolves wakes up and demands him to stay away. Snowball denies him leading to the wolves attacking. Though they are not able to do very well due to them being chained to pikes in the ground. One wolf possibly the leader breaks free and give chase to Snowball though out the carnival until he become trapped on a slingshot ride and is throw up and down. When he comes back down, he cowers in fear of the ride only for it to shoot back up. The other wolves were outwitted by Daisy having been tangled in their leads.

They are next seen searching around Central Park for the dogs. While Daisy was telling some dogs about the wolves, they shows up right behind him and chase him through the park. They lose Daisy again but one picks up the scent and find a dog walking under a bridge. They stop him and find Daisy was walking under his long fur. The leader demands to know where Hu is. Daisy fools them and outwits them.

They are next encountered on the top of a circus train car trying to stop Max. Just as they were about to a attack all but one panics and duck down before a pipe strikes the confused wolf. The chase begins along the way to the engine. One wolf jumps a car to quickly causing him to slip off the side of the car. The last two chase Max onto a cargo car. The drop on top of a strapped stack of tent supports. When the both wolves are on the stack, Max unlatches the last coupling which the stack and the wolves fall off the train.

It is unknown what happened to the wolves afterward, but it might be possible they are found by their boss, Sergei. 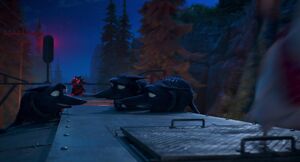 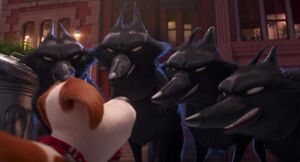 The Circus Wolves growling at Max. 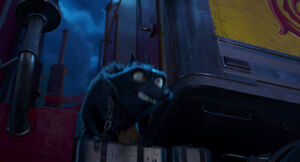 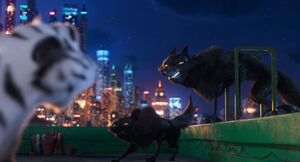