Have unique abnormalities and abilities.

Possessed/Brainwashed Criminals
The Circus of Strange, or Le Cirque D'etrange, are a group of supervillains in the DC Comics universe. Their leader is Professor Pyg and the members include Mister Toad, Niko, Phosphorous Rex, Kushti, Big Top and Pyg Dolls (Dollotrons). They would try to cause crimes in Gotham City which would put them at odds against Batman (who is actually Nightwing) and Robin. They make their first appearance in Batman and Robin #1 - Batman Reborn Part 1: Domino Effect.

One of the members of the Circus of Strange, Mister Toad, is seen with his gang attempting to drive away from the G.C.P.D. in a high speed car chase with his henchmen becoming nervous due to the Batmobile (which is flying) is gaining on them in the tunnel. Batman (Dick Grayson aka Nightwing) shoots a missile from the Batmobile and hits Toad's car which causes it to swerve out of control. Batman is able to use the Batmobile to attach itself to the top of Toad's car and is able to fly it out of the tunnel without hitting any other cars. The duo then drop the car into the water near the docks. Mister Toad climbs out of his car and attempts to escape by starting to swim towards the pier. Although Mister Toad believed that he got away when he gets to the top, he finds Batman and Robin waiting for him. They both punch him simultaneously and knock him down. This causes his briefcase to fly into the air and busts open, causing dominoes, which were inside the case, to fly out. Mr. Toad wakes up blindfolded while hanging out of the Batmobile by Batman. He interrogates him and drops him onto the ground, which isn't very far. Mister Toad threatens Batman as the Batmobile flies away. While Mister Toad is in jail, he tells the police that his cell won't hold him and that he has powerful friends that will take over Gotham City.

Later, another member of the criminal group, Phosphorous Rex, arrives in front of Gotham City Police Headquarters in a hot rod-style car. He gets out of his car and screams for help. When two police officers arrive they believe he is on fire and try to help him. However, this is just a ruse and Phosphorous Rex chokes the two officers. Meanwhile, somewhere in a house, the owner named Niko is seen trying to leave as soon as possible with his daughter Sasha after he narrowly escaped Batman. However, they are ambushed by Professor Pyg and two of his Dollotrons. Niko is restrained and tied to a table with Pyg telling him to feel every moment of his transformation. He states that Niko betrayed him, even though Niko isn't aware of who he is. Despite this, Pyg proceeds and puts a fuming deformed face onto Niko's face. One of his Dollotrons hand a saw to Pyg and he says he will make Niko perfect. The Dollotrons force Sasha to watch. Pyg says that Sasha will be next.

Later Big Top, Phosphorus Rex, Siam, and the Dollotrons storm the Gotham City Police Department and fight Batman and Robin. During the fight, four police officers get killed and six police officers are injured. Despite the casualties, Batman and Robin defeat the group of supervillains. After their victory against the Circus of Strange, it is discovered that Mister Toad has died in his cell holding a domino. Despite this, Damian is able to get a lead on the Circus of Strange and that their location is in a run-down Circus. He goes their alone without Batman and encounters a child in a cage warning to look out behind him. However, it's too late and he is surrounded and easily defeated. Professor Pyg appears and takes him prisoner. Damian later wakes up tied to a chair and sees Professor Pyg operating on one his "patients". Pyg rambles while dancing to music and describes it as "Sexy Disco Hot". While Pyg is distracted, Damian is able to loosen the ropes binding him and stops Pyg and his henchmen from putting a face on him.

After Damian finishes fighting them, he promises to help the girl get out as long as she stays with him. However she attacks Pyg and as he starts to flee Damian goes after him, only to be dragged down by the same girl for fear of being left alone. Damian then gets smacked across the face with a piece of wood. Pyg looks like he is about to finish off Damian, only for Batman to show up just in time and knocks Pyg out of the way. Pyg states how he isn't dressed and he didn't do anything wrong. Both Batman and Robin then knock him out together. The girl would later encounter the Jason Todd (Red Hood) and he proposes that she should be his partner. 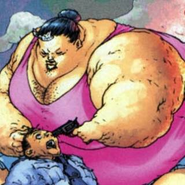 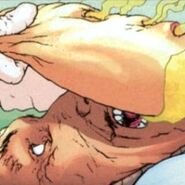 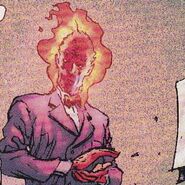 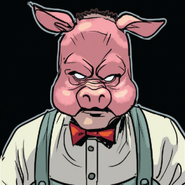 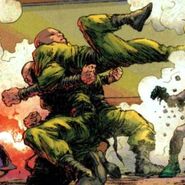