The Demon (by King Willie)

The Psycho Vigilante (by Tony Pope)

Skinning other victims and hang them upside down.

Hunt the most dangerous prey (failed).

The City Hunter is a member of the Yautja race who was sent to Earth at Los Angeles during the heatwave and gang war of 1997. He eventually came into conflict with both a government taskforce attempting to capture him and veteran LAPD Detective Lieutenant Mike Harrigan. He serves as the titular main antagonist of Predator 2.

He was portrayed by the late Kevin Peter Hall, who also played the Jungle Hunter in the first Predator film.

When his kind become intrigued to humanity since Jungle Hunter's defeat at the hands of Dutch in 1987, they sent a Hunting Party to Los Angeles ten years later with a small mothership that they hid below the city, unnoticed by inhabitants as they arrived. City Hunter then goes hunting for a potentially worthy opponent in the city while the others would observe his works.

City Hunter then found the ferocious turf war and sweltering heatwave in the city, in which he uses the chaos as an advantage to stalk and hunt some armed individuals whom may be worthy for his hunt, including the Columbian Scorpion gang who were retreating back for their stronghold. Unfortunately for him, only one of them proved worthy as he silently took one of his killed victims and took his skull as a trophy while leaving the rest hanging upside down. Also, whilst still cloaking, he found Mike Harrigan and his friends cornered El Scorpio who had gone mad by the previous fight with him. El Scorpio loses control and almost gets shot from behind by City Hunter, only to be stopped by Harrigan who shot him back where the process caused him to fall to his death.

Later that night, he bursts into Ramon Vega's luxurious downtown apartment just as a bunch of Jamaican Voodoo Posse members ritualistically murdered the Columbian gang leader. The Predator challenge them whilst still cloaking and slaughtered them, sparing no one except Vega's mistress who was traumatized by the massacre.

By the time Harrigan and his team arrived and defiantly entered the scene of the crime noticed the bullet of City Hunter's speargun that stuck on the air conditioner before Keyes and his team arrived. Enraged at his defiance, Keyes threatens Harrigan, saying he will "disappear" if he interferes again. His suspicions aroused, Harrigan orders Jerry to follow Keyes, while he and Danny discussed their plans to return to the crime scene later for further investigation into the murders. Danny arrives before Harrigan and attempts to retrieve the weapon they spotted earlier, which has gone unnoticed by Keyes' team. Unfortunately, City Hunter has also returned to the scene and revealing himself to Danny, attacks and kills him. City Hunter then proceeds to "bone him like a fish." By this act, he unknowingly becomes a nemesis for Mike.

Believing that Harrigan may be the worthy foe for him, City Hunter developed interest and respect for the detective. He goes to stalk him when he consults with King Willie, the leader of Jamaican Voodoo Posse. King Willie uses his voodoo magic to deduce the killer that killed their people and concludes that the killer is not a human, but rather a being from another world (the suggestion was not entirely accurate, as King Willie believes that the killer was a demon, not the alien). When Harrigan left, King Willie notices City Hunter's presence and challenged him in combat. In spite of his best efforts, King Willie was killed and his skull was collected as a trophy.

On the next day, City Hunter stalked Harrigan again, this time when he visits Danny's grave. He noticed a young boy with a toy gun who stared at him in spite of his cloak activated and becomes cautious when he sees the gun. City Hunter scans his machine gun and spares him after he notices that the supposed "machine gun" is harmless. The predator then left Danny's necklace to Harrigan where he could see it and left just as Harrigan become agitated.

By this point, City Hunter knows how to test his chosen worthy prey, which is through his colleagues.

Knows what to do, City Hunter made his move for Harrigan's colleagues whom on board the train to ambush a group of thugs. Since he deduced that harming Harrigan's friends would harden him to be a worthy opponent that his final hunt would be challenging and exciting, the predator entered their fight and challenged them to see how formidable they are against him. Consequently, the already tense shootout become chaotic than Detectives Jerry Lambert and Leona Cantrell could handle, with many gunmen killed by the fight. Even so, Jerry and Leona proved themselves to be formidable opponents that they managed to hold their own against City Hunter. Impressed by their feats, he goes to killed them for another trophy but is shocked to see that Leona was pregnant before he could lay her one finger. Because of this and his kind's honor code to never harm offspring, he spared her and only took Jerry's skull and spine instead.

Harrigan soon arrived at the scene and gave chase to the Predator, but losing him when Keyes' goons intercepted him as he neared the city's slaughterhouse district. The City Hunter climbed the nearby Eastern Columbia Building and presented Jerry's skull as a trophy to the world, attracting a bolt of lightning with his Combistick.

As Keyes revealed City Hunter's proposed origin to Harrigan, City Hunter returned to a slaughterhouse he uses as a source of food during his time in the city. His said visit was interrupted by Keyes and his OWLF team who activated some sprinkles that sprays water mixed with the radioactive material which jammed his cloaking device and interfered with his thermal vision mode. Though it appeared City Hunter had disadvantages as his enemies wore special suits that both protected them from hazardous material and hide their signature heat, the predator, recalled on how Dutch defeated and outsmart Jungle Hunter in the past, quickly switches to various vision modes until he found a vision mode that exposes the light coming from their ultraviolet torches. With his, he eluded and tricked OWLF team to gather in one spot and performed counterattacks with his Combistick, Plasma Caster, and Wrist Blades.

As Keyes horrified that the predator more armed and deadlier than before, Harrigan chooses to take the matter with his own hands. Armed with various weapons and protective plate that he put under his clothes and body armor, Harrigan entered the scene and an intense fight erupts between them. City Hunter blasted the hero with a plasma shot, but thanks to the protective plate that he wore beneath his clothes, he remained unharmed and successfully disabled the predator's plasma caster before briefly K.O.ed the predator with numerous blasts of his shotgun.

As City Hunter seemingly incapacitated, Harrigan opened his mask and as he expresses his disgust on his look, the predator woke up and yelled on his face before tosses him aside and smashed his shotgun to pieces. He then goes after his now disadvantaged opponent but is interrupted by Keyes' arrival who tried to incapacitated him. The predator swiftly sliced him in two with his smart disc, and the fight continues to the roof. As they fight, City Hunter lost his Smart Disc and Combistick, and as he later found himself hanging perilously over the end of the building, the Predator attempted to activate his Self-Destruct Device out of believing that the fight ended in stalemate and they had to end it by destroyed each other. Unfortunately, due to his Smart Disc attached on the wall near his opponent, Harrigan sees the opportunity to took the weapon and slice his Wrist Gauntlet in half, disabling the device and cutting his arm off below the elbow. The Predator fell into Ruth Albright's nearby apartment and administered emergency medical aid using his Medicomp to cauterize his wounds before the chase continued down into the underground tunnels. He also realized that his fight was far from over with Harrigan sliced his Wrist Gauntlet and he had temporarily retreated to his trophy room in the mothership.

As Harrigan stumbles upon his trophy room, City Hunter shoots his net gun on him, only for Harrigan, now better in handling the weapon, frees himself and continue the fight. Ultimately, the fight ends with Harrigan delivered a fatal blow on the predator's stomach with the smart disc before rises it to the chest, killing him. Harrigan emerges victorious and is greeted by City Hunter's comrades who go to collect their fallen friend's body.

The leader of City Hunter's team, knowing his friend fallen in a fair match, honored Harrigan with an antique flintlock pistol before letting him go and leaving the planet.

As with other members of Yautja race including Jungle Hunter, City Hunter was nurtured into ruthless headhunters who hunt challenging prey for sport and followed his kind's strict codes. City Hunter also utilized similar methods with Jungle Hunter's in attacking armed humans he found during the heat of turf wars as well and share the same standards with the latter do. While City Hunter had more types of equipment than Jungle Hunter at his disposal, he was not as experienced as Jungle Hunter did because the latter spent a long time on the field than him. His approach in hunting worthy prey in Los Angeles was a bit reckless since he too excited upon discovering Harrigan's worth as his challenging prey that he overestimated how powerful his opponent can be that resulting his grave disadvantages in their final fight.

In spite of his recklessness as the fight at the subway also resulting some of the civilians got killed due to caught in the crossfire, City Hunter diligently follow his kind's code. He only attacked armed humans to test their worthiness and spare children and pregnant women he encountered. Upon discovered that Leona who fought him pregnant, the predator was horrified and choose to spare her. When encountered a child who carries a gun when stalking Harrigan, City Hunter was shown cautious that he pointed his plasma caster on the boy, but eventually spared him after vision mode on his bio-mask confirmed that the gun was a toy. City Hunter still uphold his honor in his battle against Harrigan, as in spite of him shown retreating after gunned down by the hero and lose his mask, it was only to reorganize his plan to deal him upon discovered how tough he can be and running away like a coward is never an option nor something taught by his kind. His determination to uphold his honor culminated to the point of him willing to choose either self-destructing with his opponents or confront his opponent in mortal combat (though he only able to choose the latter as Harrigan cut his wrist gauntlet off) that made him still considered as honored Yautja by his clan leader. 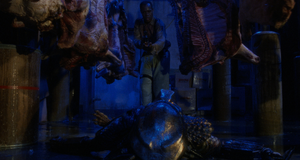 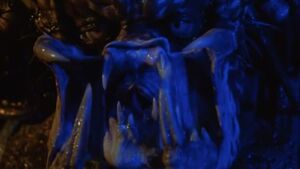 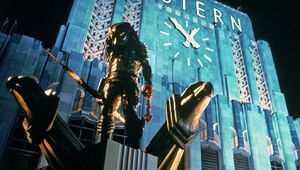 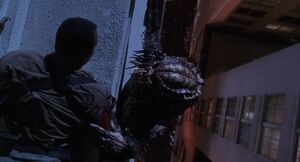 City Hunter clings to Harrigan after the slaughterhouse falls. 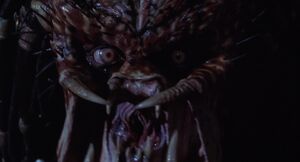 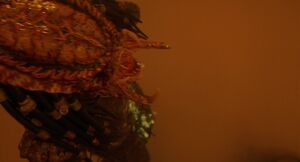 City Hunter's death after Harrigan impaled him with his own metal disc. 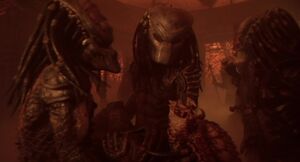 The Yautjas take the body of City Hunter. 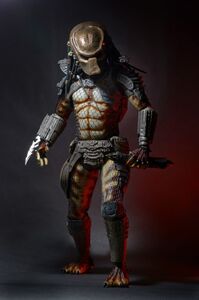 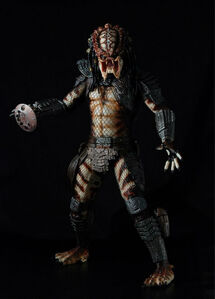 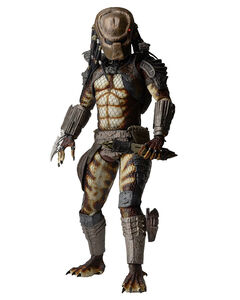 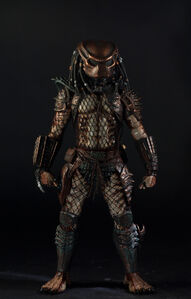 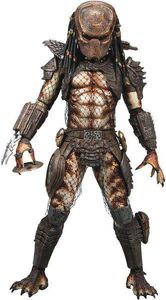 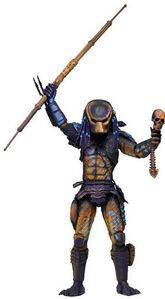 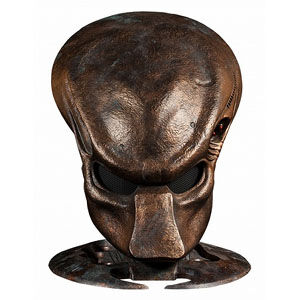 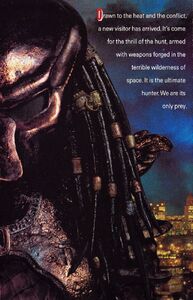 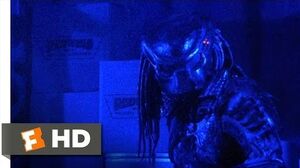 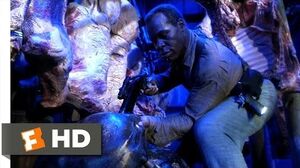 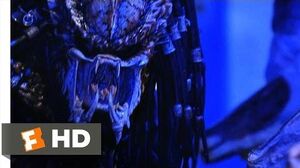 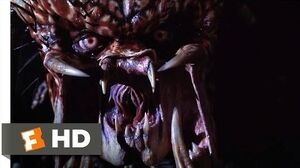 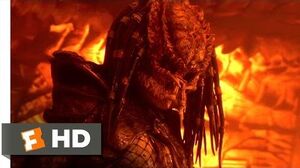