Take revenge on all those who betrayed her husband and herself.

Get in the White House as the VP wife.
Assist her husband in usurping the President and become the new First Lady.
Become the US ambassador to the UN (all succeeded).
Become a U.S. Congresswoman from Texas (failed).
Become the Democratic nominee for Vice presidency (succeeded).
Help Frank win the 2016 Election in order to eventually become the new president of USA.

Claire Hale Underwood, later returning to her maiden name Claire Hale, is the deuteragonist in Seasons 1 to 5, later main protagonist in Season 6, of the Netflix series House of Cards. She is Frank Underwood's wife and number one co-conspirator, as she happens to be as cunning, manipulative and ruthless as her husband.

After Kevin Spacey (who portrays Francis) was fired from House of Cards following several allegations of sexual harassment and assault, his character was written out of the show and Claire became the main character.

She was portrayed by Robin Wright.

Claire is an only child, born at April 8, 1966 at Dallas, Texas. She comes from generations of ranchers and she lives at the elite enclave city of Highland Park. Grow up into riches and luxury, she becomes very sophisticated and she attends the the prestigious Phillips Academy before she goes in Radcliffe. However during her studies she was sexually assaulted by the future General Dalton McGinnis and as result got pregnant (although she had abortion). After her graduation at Radcliffe she went into Harvard. It is also believed that she met Frank Underwood during her time at Radcliffe.

Claire is the CEO and the founder of Clean Water Initiative (CWI), a charity, non-profit organization intent on bringing clean, drinkable water to developing impoverished countries. However she is just as ruthless, cold-hearted and pragmatic as her husband since she did not hesitated to fire half of her staff including old people who could not get another job. She abused her position in order to help her husband in his political plays and as a way for her and her husband to appear as caring individuals. After Frank did not become Secretary of State, she agrees to help him take revenge and force themselves into the White House. However she did not hesitate to sabotage Frank when he did not grant her with fund for her projects. After that and for a few amounts of episodes she leaves him and go live with her lover, photographer Adam Galloway, in New York. She however returns back to Washington, DC after the death of Peter Russo (one of the her husbands puppets) and she continues assist Frank in his crooged way to power. At the end of Season 1 Frank has become the Vice-President and she leaves CWI to the hands of her former partner Gillian Cole.

In season two, Claire has an office in the White House and secretly helps her husband to usurp President Walker. During an interview, it is revealed that she had been raped and as a result of that she had an abortion. After that she starts a bill to prevent military officials to rape female soldiers. She even convinces the First Lady to sign as she and herself have become very close friends. It is all fake however, since she exploits both the First Lady and another female rape victim to achieve her and her husbands goals. After she betrayed the female soldier who she used in order to gain publicity for her plans, she abandons both her bill and the woman, whose life and mental health are ruined because of Claire. She manipulates the First Lady into visiting a physiologists alongside with her husband in order to save their marriage. She then leaks this to the press implying that president's mental state is not healthy. This will leave the road open to Frank to give the decisive strike, force President Walker to resign and take the presidency.

Claire is now the First Lady with all the luxuries. She however is restless since she wants to gain experience by holding political office in order to run for president in 2024. She has fail the commit for the US ambassador to the UN which results in her forcing Frank to place her in the position by abusing his power. She starts her career quiet successfully however, as she make several alliances in UN. But this won't last because a peace crisis breaks out between America and Russia involving the Jordan Valley. The Underwoods start negotiating terms but President Petrov refuses them. Claire makes alliances and manages for a peace keeping orientation and she agrees with Frank to send troops to Jordan Valley, something Russia sees as detrimental to Russia's sphere of influence in the Middle East. Her downfall however is with another incident between America and Russia. Russia has arrested an american activist, Michael Corrigan, because he protested against the tyrannical Russian administration. Claire and Frank travel to Russia for negotiations for both Corrigan and the crisis at Jordan Valley. Claire requires to have a private talk with Corrigan in order to persuade him to sign Petrov's contract and return to America. She fails though and Corrigan commits suicide. Both parties agree to an announcement and then there would be made peace at the Jordan Valley. Claire however announces to all the world that Corrigan committed suicide because of Russia's torture and inhuman ways of treating him. This ruined the peace plans and all relations between America and Russia. During the trip back to America, Claire argues with Frank which leads to her being fired of the ambassador office. She returns to be the First Lady again and starts helping Frank to win the Democratic nomination for Presidency. She lays a partial role in his campaign. However, she feels a certain disappointment because of her being only the way to Frank's power goals. She confronts Frank in the oval office and tells him he is not enough for her. After probably the greatest fight between both of them she decides to leave him in the middle of his campaign.

Season four starts with Claire being back to Dallas to her parent's house. There she meets with her mother which is very sick (although that is not known by Claire). She refuses to speak with Frank and she hires a woman, Lyanne, to be her campaign manager for the 30th district. Frank discovers it and sabotages her plan by nominating a black congresswoman. She then is forced to tell the world that she is with her mother and not her husband because of her mother terminal illness. After the announcement she rejoins Frank's campaign unwillingly. She starts to secretly sabotage him by exposing dirty secrets to the public, such as Frank's father involvement to the KKK. When Frank discovers it she tells him that if he wants to win the election he has to nominate her as his Vice-president. He refuses it and tells her that she will only be the First Lady. However, after it Frank was shot, and with him out the way she returns to the White House and manipulates the acting President Donald Blythe. She actually rules the White House and starts unauthorized projects by the president. During the G8 meeting she confronts Petrov and persuades him to sign with the Chinese and stop the oil crisis. When Frank regains his strength and is informed about her actions he congratulates her and apologizes about his behavior. He understands that he is in need of her and promises her being on the ticket. After a long way of lies and dirty games she get the nomination for Vice-presidency and continues to help Frank with his agenda. During the last episode of season 4, they are both in a very bad situation since many of their dirty secrets comes out, they need to negotiate with a terrorist group and deal with the elections. While Frank is about to give up she suggests to bring fear and create chaos in order to win the election. The ending scene consisted of them being ready to unleash terror through the world.

Claire is a very strong and decisive woman. She is ready to do whatever it takes to gain what she wants and doesn't let her feelings get in the way. She is cunning, ruthless, cruel and manipulative. She is willing to betray everyone and also erase anyone who will pose as threat to her. However she has a soft side since she is being seen to have some regrets (ex. when she fails to save Corrigan or when she abandons her protege) and she has affection towards others such as Tom Yates, Adam and even her mother, whom she has a very troubled relationship. 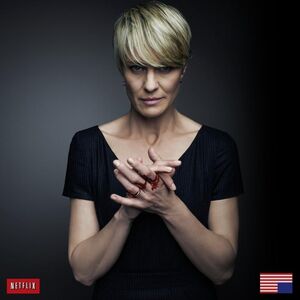 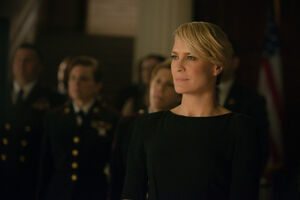 Claire at an event 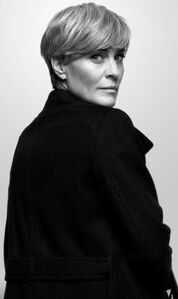 Retrieved from "https://villains.fandom.com/wiki/Claire_Underwood?oldid=3877083"
Community content is available under CC-BY-SA unless otherwise noted.