Dissect the three animals for the pathogen.

Force Kate Caldwell to reverse-engineer the pathogen.
Force Davis and Kate to distract the monsters so she can escape (all failed).

Claire Wyden is the main antagonist of the 2018 science fiction film Rampage, based on the 1986 classic arcade game of the same name.

She is the CEO of Energyne and older sister of Brett Wyden who is responsible for the mutation of George, Ralph and Lizzie with the mutagenic serum for Project: Rampage.

She was portrayed by Malin Åkerman in her first villainous role.

Doctor Wyden was the head of Energyne, a corporation specializing in genetic editing. At some point, Dr. Kate Caldwell was met with a job opportunity to aid Wyden in what she terms Project: Rampage which she accepts as she was trying to save her brother who was terminally ill. However, just as Kate was nearly reaching the end of her research, Claire sets her up to be arrested, leading to the death of her brother.

At the beginning of the film, a woman attempts to avoid a rat that had been mutated by the pathogen, becoming aggressive and bloodthirsty. However, only three of the canisters containing the pathogen are released onto the Earth after the woman's escape pod explodes. One of the canisters lands into the gorilla habitat, which leads to George, a rare albino gorilla, accidentally becoming infected by the pathogen, which causes him to grow rapidly as well as to become extremely vicious and dangerous. The remaining two canisters infect two other animals which include a crocodile named Lizzie and a wolf named Ralph, causing them to become gargantuan hybrids.

Davis, a primatologist and the leader of an anti-poaching unit, is contacted by Kate who tells him that she could find a way to cure George. However, they are both captured by a government team lead by Agent Russell. When Claire is informed about Kate, in fear of her schemes being ruined, she devices a plan where the giant animals are lured to the city by a massive transmitter that generates certain sound frequencies so that they could be dissected, so Kate would die on the plane George is on.

However, this could end up leveling the city, killing dozens of citizens in the process, but Claire expresses no concern over this. George awakens from his sedative-induced sleep and causes the plane to crash to the ground. However due to his quick thinking, Davis saves himself, Kate, and Russell from getting killed, and George himself also survives, having sustained a few minor wounds.

Kate informs Davis of an antidote for the pathogen which while it wouldn't revert the animals back to their default sizes, it would neutralize their aggression. As they were trying to find the antidote in Energyne, they are confronted by Claire and her brother Brett. Claire forces the two to give them the antidote, shooting Davis into submission. However, Kate manages to slip the cure into Claire's handbag and punches her towards the direction of George. George grabs Claire and drops her into his mouth, swallowing her and the antidote whole before destroying the transmitter. Meanwhile, Claire's brother attempts to flee, only to be immediately killed by the falling debris, but not before he encounters Agent Russell, whom he urges him to hand over a laptop as evidence incriminating Claire.

Claire is pretty much a ruthless and calculating woman who willing to cause scores of innocent casualties simply as part of her experiments with the pathogen and its subsequent application as deadly bioweapons. She even not above sacrificing her own colleagues and underlings. 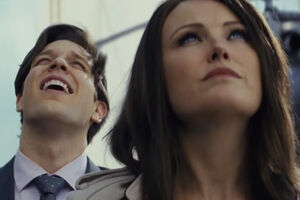 Claire with her brother Brett. 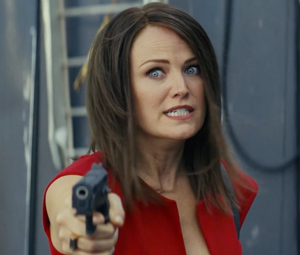 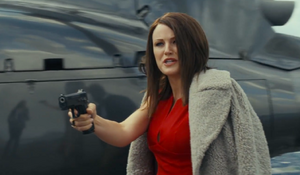 Claire smirking as she holds Kate at gunpoint. 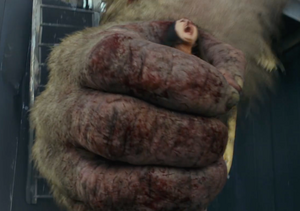 Claire screams in terror as George grabs her upon being pushed towards him by Kate. 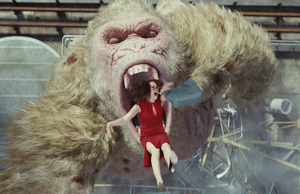 Claire's death as she is dropped screaming into George's open mouth and swallowed whole.