Lieutenant of the Musketeers

Clarabelle Cow is the secondary antagonist, turned anti-hero of the 2004 Disney direct-to-DVD animated film Mickey, Donald, Goofy: The Three Musketeers. Unlike most versions of the character, in this story, she is the sadistic lieutenant of the Musketeers and right-hand woman to the villainous Captain Pete, however she eventually redeems.

She was voiced by April Winchell, who also played Cruella De Vil in 101 Dalmatians: The Series, Ma Duskerton in Gravity Falls, and Hypnotheria in Teamo Supremeo.

Clarabelle serves as the lieutenant of the Royal Musketeers, second only to Captain Pete. Pete develops an evil plan to use the Beagle Boys to kidnap the Queen Minnie and overthrow her, appointing himself King of France. When the Beagle Boys fail to get her, Pete has Clarabelle throw them into the dreaded "pit", which turns out to only be a few feet deep.

When Queen Minnie demands Musketeer bodyguards in response to the Beagle Boys' treacherous actions, Pete decides to recruit Mickey, Donald, and Goofy to be her bodyguards, knowing they will prove too incompetent to hinder his evil plans. He happily sings about how he is going to win as he descends into his secret lair where Clarabelle is waiting for him. He recruits the Beagle Boys to finally kidnap Queen Minnie. However, the rookie Musketeers prove to be more competent than Pete expected and defeat the Beagle Boys.

Fed up, Pete recruits Clarabelle to lure Goofy away and dispose of him while the Beagle Boys scare Donald away and Pete locks Mickey in a flooding dungeon to die. Clarabelle kidnaps Goofy and ties him in chains, then plans to throw him off of a bridge to his death. However, the dimwitted Goofy actually falls for his captor, and begins to serenade her. Clarabelle tries to resist his charms and tie him to an anvil, but Goofy soon wins her over with his compliments and advances. Clarabelle falls in love and decides to reform, freeing Goofy and warning him of Pete's evil plans. She directs him to where Mickey is being held, but they fall off the bridge and into Donald's boat. Goofy convinces Donald to come back, and the two go and save Mickey, then battle Pete and defeat him once and for all.

As Mickey, Donald, and Goofy are being dubbed royal musketeers, Clarabelle watches on with pride, presumably having been pardoned for her redemption. She ends up with Goofy and lives happily ever after.

Clarabelle in this version is portrayed as a cruel sadist, taking delight in torturing and attempting to kill ally and enemy alike. She is loyal to Pete and uses her role as his right-hand to indulge her evil urges. However, the charms of Goofy are able to sway her heart, and she uses her love for him as a means to eventually redeem herself. 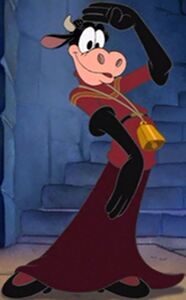 Clarabelle on the phone. 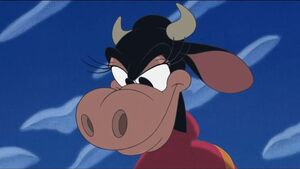 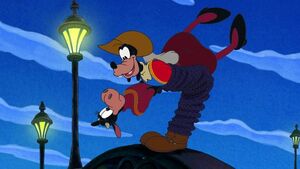 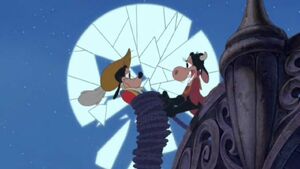 Clarabelle's redemption.
Add a photo to this gallery 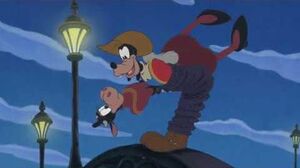 Mickey, Donald, Goofy The Three Musketeers - Chains of Love
Add a photo to this gallery

Retrieved from "https://villains.fandom.com/wiki/Clarabelle_Cow_(The_Three_Musketeers)?oldid=3800173"
Community content is available under CC-BY-SA unless otherwise noted.