Entity from the Tuurngait hivemind

Messing with his host.

Clarence is the secondary antagonist of the 2008 horror game Penumbra: Black Plague.

Once a nameless entity in the Tuurngait hivemind, Clarence started to develop his own identity and twisted sense of humor when he got seperated from it and manifested inside of Philip Buchanon's mind as the result of an abnormal reaction to his infection with the Tuurngait virus.

He was voiced by Robert Pike Daniel.

Clarence named himself while going through the "space" in Philip's mind when he came about a section devoted to film titles. He states that Philip has not only seen 3,103.5 movies, but also that Philip only watched the first half of "It's a Wonderful Life" and states that he now will never know how the movie ends. This is where he gets the name Clarence from as he states he is somewhat of a guardian angel.

He is first heard in the sewers, where he transports Philip to a dream world where he must solve some puzzles. After that, he constantly taunts Philip throughout the game, calling him a "monkey" and insulting the human race, hinting that the Tuurngait's "hive mind" intellect is superior to mental individualism. Twice he calls enemies to attack Philip, once with Dr. Eminess in the computer room, and once with an Infected that bursts through a door in one of the hallways. Residing in Philip's mind, Clarence apparently has the power to manipulate or even block out vision, which he uses to trick or frighten Philip with imaginary enemies. Though originally he seems to be solely dedicated to "freeing" himself by getting Philip killed, he eventually switches gears and decides to try to convince Philip to at least share control of his body with him.

Clarence is forced out of Philip's mind when the cure is injected, but the machine transfers Clarence into a nearby infected corpse. He revives the body and tries to get revenge on Philip for attempting to kill him, but is killed by the Tuurngait (as his self-consciousness was destroyed upon being reintegrated with the Tuurngait, the only way it can be referred to is as a killing). Immediately following this, they stop attacking Philip. Philip notes in his final message that he has more in common with Clarence than the Tuurngait. 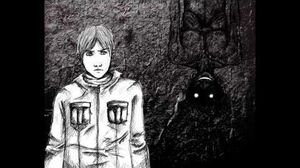