Become the most nefariously powerful crime kingpin in Delta City (both failed).

Clarence Boddicker is the central antagonist of the 1987 sci-fi film RoboCop and a posthumous antagonist in it's 2 sequels.

He is a nefarious and homicidal gang lord who also works for OCP senior vice president Dick Jones as his personal contract killer. In addition to this, Boddicker was a sadistic psychopath whose criminal record was quite lengthy as the list of charges had included rape, grand theft auto, armed robbery, and mass murder. He is significantly responsible for the creating of RoboCop by OCP after he brutally gunned down Officer Alex Murphy, which consequently resulted in both his wife Ellen and their son James moving to a new home in the process.

He was portrayed by Kurtwood Smith, who also played Thomas Perry in Dead Poets Society, Bill Patterson in The X-Files, Walt Disney in Robot Chicken, Gene in Regular Show in General Nathan in Rick & Morty.

Clarence is advantageous of the future corrupt police force in Detroit, Michigan to the point becomes a shameless cop-killer and a sadistic criminal, where he went on a bloody citywide rampage where he robbed banks and caused misery for anyone that got in his way. Boddicker was also a hired employee-turned-personal hitman of the corrupt businessman Dick Jones, who owns the police force.

He is also a vituperative and traitorous man with a snide voice and particular hatred for the police, and has assembled a rough band of equally psychotic thugs like his enforcer Emil Antonowsky along with fellow gang members Joe Cox, Leon Nash, Steve Minh, Dougy, Bobby to do his bidding for the corrupt and powerful people whom he associates with; which also makes him a ruthless crime lord as well.

In a sharp contrast to his own savagery in which he has no qualms about dishing it upon others, Boddicker is a coward who was perfectly willing to do or say anything to save his own life when the savagery is on him, including setting up his own partners into a deathtrap. Clarence also often snorted alcohol to get a buzz, something never before seen in film. Boddicker was also extremely profane, blasphemous, and foul-mouthed, normally bringing profanity into every sentence he could muster.

According to this rap sheet halfway in the film, he is a prime suspect for multiple rapes, drug trafficking, and possession, as well as murders of at least 32 officers, a number of whom he subjected to torture via firearms.

Clarence and his thugs made physical appearance when they were fleeing from a bank robbery, with Clarence raging at one of his henchmen for accidentally burning the money, only to have two police officers chasing them (these two officers would continue chasing them throughout the movie). Clarence and his men engage the two police officers in a shootout, and the criminals manage to escape by throwing the thug Clarence had argued with before at the police car. Following them to an old steel mill in sector 3D, Alex Murphy, one of the two police officers, boldly tries to take on the gang, only to be ambushed. Then Clarence and his group subject him to a brief but very agonizing torture, in which Murphy is partially mutilated alive with a firearm and then brutally gunned down to death.

Alex Murphy's corpse is reused by OCP to undergo heavy surgery and become the cyborg "RoboCop", and upon discovering the truth (he went to search about his past self in which Murphy ended up feeling more loss than gain) about his human past, RoboCop becomes intent on bringing Boddicker and his men to justice by any means necessary. While RoboCop was tracking down and apprehending two of his minions (Emil and Leon), Clarence tracked down and tortured Bob Morton, an OCP executive involved in RoboCop project that recreated Murphy as a cyborg, to death as requested by Dick Jones who was irate about RoboCop project and Morton's quick ascension.

In the next scene, RoboCop manages to corner Clarence, Minh and Cox while he was dealing with another crime lord in a narcotic factory named Sal, forcing that kingpin into partnership with him. A huge shootout ensued, with RoboCop fatally gunning down anyone who puts up a fight.

When the smoke is cleared Clarence and RoboCop were the only two men left standing. It didn't take long for RoboCop to catch up to Clarence, and after receiving some raw physical "Miranda Rights" from the wrathful cyborg Clarence, now clearly fearing for his life, cowardly admits to being hired by Dick Jones in order to save himself. But RoboCop, still his grievance unabated, began crushing Clarence's jaw and snuffing the criminal out of his life until the cyborg's Directive 3 programming (to uphold the law) compelled RoboCop to spare Clarence's life. Clarence was taken to police shortly thereafter.

However, RoboCop underestimates not only how well-connected Clarence Boddicker is with the monopolistic OCP, but also the power that organization has over him, as Clarence is quickly freed from prison by Dick Jones, and when RoboCop attempts to arrest the latter, his system shuts down, and he is nearly killed by ED-209 and Lieutenant Hedgecock the Detroit SWAT Leader turned traitor and is narrowly rescued by Officer Anne Lewis who has been informed of Lt. Hedgecock's betrayal by Kaplan.

Clarence meets with Dick Jones after he is released from prison, and Jones berates Clarence for blurting out their relation to RoboCop. Clarence defends himself by stating that he had no choice as RoboCop was about to kill him. Jones once again berates Clarence that RoboCop is a cyborg with ability to record everything Clarence confessed. Clarence angrily refuses to deal with RoboCop again and tells Jones to deal with his own mess in which OCP made. However, Dick goads Clarence by telling him of how he could single-handedly benefit from the construction of Delta City.

Clarence, enticed with potential monopoly of future profits, once again agrees to serve Jones. But Clarence demands Jones more powerful military weaponry, which Jones issues to Clarence with a tracking device as a bonus. Clarence rounds up his surviving gang members once more, making them familiarize with their new arsenals issued by Jones, all the while causing chaos during the police's strike thanks to Lt. Hedgecock of obeying Dick Jones' orders to destroy RoboCop and is now branded as an outcast and dismissed from the police service.

After causing enough destruction and anarchy, Clarence directed his gang to hunt down RoboCop at old steel mill. Clarence, aware of the risk he and his gang were taking on, instructs them to just kill RoboCop and not to pull anything fancy. They chase RoboCop down to an old steel mill, combating him with anti-tank cannons. Clarence attempted to sandwich RoboCop by circling around the site on the service road, with Emil coming from opposite side with his van.

However, RoboCop manages to eliminate the gang one by one (this time for good), marking the begin of the destruction of Boddicker's gang: Joe Cox, who survived Robocop's lethal crackdown on the Sal's narcotic factory by accident, was not so lucky this time and the first thug to be taken down. Emil's body began to horribly melt away as he was doused with toxic sludge during his attempt to kill the cyborg, only for RoboCop to lure Emil smashing into toxic container.

Clarence, oblivious to what happened to Emil, drove on his car with his plan to corner RoboCop, but officer Lewis intercepted and chased him closely behind. Solely focused on losing pursuing Lewis, Clarence fails to see Emil limping his way onto the open road and ends up running over Emil, with Emil's blood and bodily fluids literally splattering onto Clarence's windshield. Clarence loses control of his car which leapt over a mound of scrap and came down roof first in a shallow drainage canal. When Lewis pulled up and dismounts from her police car to investigate, he ambushes her, wounding her badly.

As Clarence was about to make Lewis his 33rd victim, RoboCop stops him. Clarence, seeing Leon, his last surviving minion on top who is making his way to the crane, feigns surrender. But RoboCop reveals to Clarence that he won't even bother arresting him, once again frightening and unnerving the crime lord. However, Leon Nash, after taking control of a crane, manages to drop several tons of steel on RoboCop before being blown up by Officer Lewis using Clarence's own anti-tank rifle. Seeing RoboCop still being incapacitated, Clarence takes a length of jagged metal and attacks RoboCop, then plunging the bar through his breastplate.

Leaning in for the kill, he gets too close to RoboCop and the cyborg lunges, stabbing him through the neck with his data spike. The wound severs his jugular vein, causing powerful spurts of blood to come shooting forth in time with Clarence's elevated heartbeat, which reduces in intensity as Clarence falls into the rust filled waters and perishes. His death along with his gang and Dick Jones who was fired by the Old Man and Lt. Hedgecock's obeying the orders to destroy RoboCop soon lead to a new organization led by the Nuke Cult to rise with the police strike still going on despite the orders to destroy Robocop already called off. 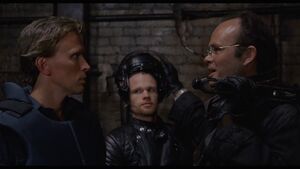 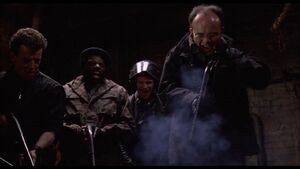 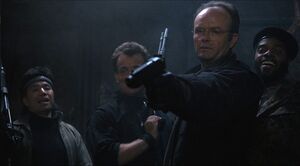 Clarence shoots Murphy in the head. 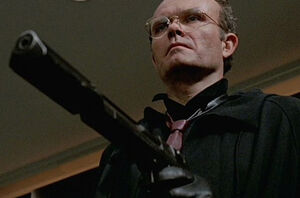 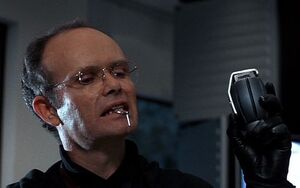 Clarence plants a grenade in Morton's home after incapacitating him. 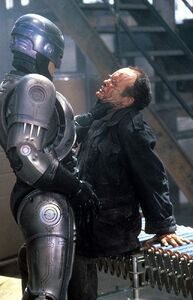 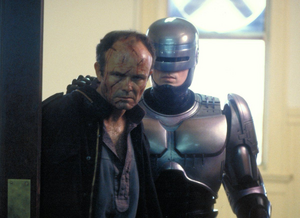 RoboCop bringing an arrested Clarence to the police department. 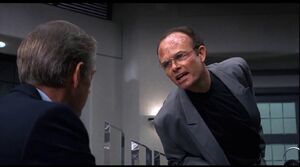 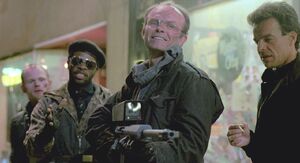 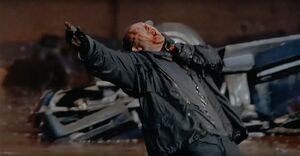 Clarence dies of blood loss after getting stabbed in the neck. 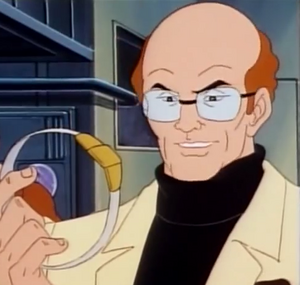 Clarence Boddicker in the animated series.