Street racing all over Rockport City.

Hanging out with the other Blacklist members.
Harassing the player.
Seducing Mia.

Take the Player's spot on the Blacklist and their car (succeeded; failed as player eventually gains them back).

Continue to keep his top position on the Blacklist as well as the Player's car (failed).
Make Mia Townsend his girlfriend by stealing her from the Player's side (failed).

Clarence Callahan, also known as Razor, is the main antagonist in Need For Speed: Most Wanted.

In the beginning of the game, Razor drives a black 2005 Ford Mustang GT with unique flame paint vinyl, before winning the player's BMW M3 GTR.

Razor later becomes the recurring antagonist in Need For Speed: No Limits, currently driving his black 2015 Ford Mustang GT in every Special Event. Implying he either escaped/got out of prison and re-bought a Mustang similar to his old one. (If this is even canon to the Most Wanted/Carbon storyline.)

He is portrayed by Derek Hamilton.

As the player came into town, he was working his way up the Blacklist until Razor takes interest in the player's BMW M3 GTR. Razor challenges the player to a race and sabotages the ride by having the oil cap unscrewed so that the M3's engine seizes from lack of oil during the race in order to win the pink slip to his car.

This led to the player being arrested by Cross and the Rockport Police Department (RPD). Using the BMW, Razor rockets to the top of the Blacklist, the fifteen best street racers in Rockport, and the most wanted by the police.

During his way up to the Blacklist, Razor contacts the player the most throughout the game, telling him things like the player meeting Rog in prison, sarcastically thanking the player for the BMW, and assuming that the player is working for the police, along with threatening the player repeatedly.

In the end, the Player defeats Razor, but before reclaiming the BMW, Razor tries to prevent the Player from doing so until Mia takes him down and reveals herself as an undercover police officer for the RPD. Razor and the other 14 Blacklist Racers are arrested by Cross and his men.

Razor is a bossy, spiteful, and manipulative scammer. His arrogance as Blacklist de facto leader is seen in the first scene, when Razor makes his first appearance. He argues with Ronnie before mocking the Player. He tells Mia that he can smoke the Player when she says that she knows his ride does not have a chance against him. In the race, knowing that he can be defeated by Player, he sabotages his car and wins the pink slip for the BMW. He is mean to the Player every time he has the occasion, and goes so far even mockingly calling him "sweetheart". He is also very dangerous, as he immobilized a total of 225 police vehicles and damaged 450 of those vehicles. He is also slippery, resisting police attacks until game's ending.

In addition, Razor's hubris of believing that by winning the race, even if he had to cheat, he would be more respected and recognized by the other racers, and would thus allow him to win Mia's heart. It can be implied that Razor considers women to be inferior to him, as he often calls the people he picks on "sweetheart", and even tried to assert his dominance over Mia by denying her words regarding his loss or her knowledge about cars. Ironically, he got wrestled to the ground and arrested by Mia, who even refused to kiss him. Nevertheless, the player's loss only motivated them to get higher on the Blacklist, and would result with Razor's pride and errors in his ways becoming his ultimate downfall.

In the first scene, Razor appears with a black T-shirt, as well as some bracelets and tattoos on his arms. His overall physical appearance has short brown hair, dark eyes, and tattoos on his shoulder and above his chest. Additionally, he sometimes wears a either black or white tank top, included with a black jacket and jeans. (Such as in the last race against him when you win your BMW pink slip back.) 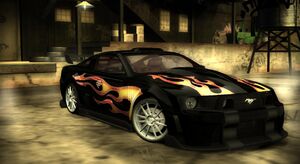 Razor's Ford Mustang GT (as seen in the beginning of the game). 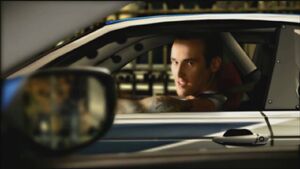 Razor before racing the player. 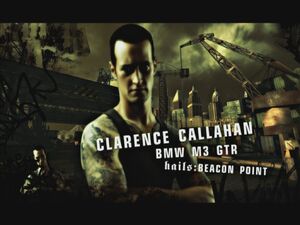 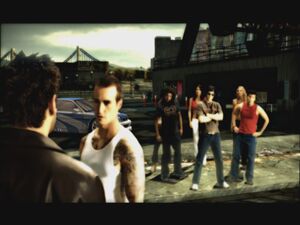 Razor is unwilling to give up the BMW M3 GTR to the Player, with several Blacklist racers accompanying him. 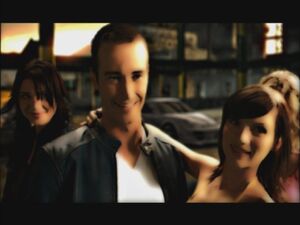 Razor grins evilly as he celebrates with the Blacklist — after sabotaging the race between the Player, enabling him to take their ride. 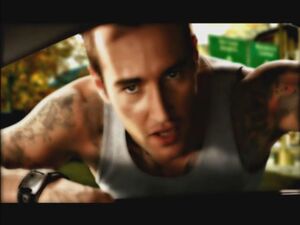 Razor antagonizing the player in their car.