Expend his business (succeeded, until Niko Bellic kills him).

Clarence Little is a minor antagonist from Grand Theft Auto IV. He is a drug dealer based in East Holland and a central member of the East Holland Drug Gang.

He was voiced by Jerry Cliquot.

Francis McReary orders Niko Bellic to kill Clarence, as he lacks any evidence to either arrest, and because Clarence threatens to expose McReary's corruption. Niko is at first reluctant since he doesn't really care if Francis is exposed, but then agrees to kill Clarence, but only for $5000.

Niko then goes to East Holland where Clarence and his gang is located. Niko manages to corner Clarence in the rooftop of his apartment complex, killing all of his goons in the process.

The player has the choice to either spare Clarence or kill him. If the player choose to spare him, Clare will later reappear in a Random Character mission.

Niko finds Clarence again and at first, Clarence seems to be thankful for Niko's mercy, but then tries to kill him with a pistol since he's tired of being pushed around. Niko however, is much more trained and easily kills him, ending his criminal activities for good. 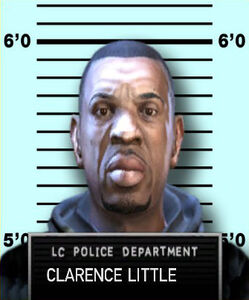 Clarence Little's mugshot
Add a photo to this gallery

Retrieved from "https://villains.fandom.com/wiki/Clarence_Little?oldid=4152829"
Community content is available under CC-BY-SA unless otherwise noted.