Bossing anyone around her.

Hanging out with her friends or pet human Hugo.
Antagonizing the Dalmatians.

Get married with Dylan with his supposed royalty. (ultimately failed).
Either provoke or provoke back the Dalmatinas in any way.
Summon Pearl after Dolly caused Hugo's injury by proxy (formerly until being suggested by Doug and Delilah for Dolly to do Hugo's chores for him and have him be put to the Hospital).
Have Prince Corgi believe that she was the owner of Dolly's Skateboard. (failed).
Stop Cruella De Vil from kidnapping the Dalmatians (mostly failed at the initial start but ultimately succeeded by Hunter De Vil and the Dalmatians).

Clarissa Corgi (known as Kǎlìshā [卡麗莎] in the Chinese version and Klaríssa [Κλαρίσσα] in the Greek version) is a reoccurring antagonist in the Disney Channel series 101 Dalmatian Street. She is the Dalmatian family's former cruel spoiled neighbor and Dolly's former arch-rival. In the first season's finale she becomes a supporting character in the season finale of the show's 52 episode titled "De Vil Wears Puppies".

She is voiced by Harriet Carmichael.

She appears to resemble a tan colored Corgi having tall ears, a wide head, a small body with small legs and paws, and a tiny tail, some girly eye-lashes, a large snout, having a mole on her face, and a collar colored magenta with white studs.

Clarissa Corgi is rather quite cynical and sassy showing mostly an antagonistic side until the Season Finale where she actually had standards against Cruella De Vil attempting to kidnap the Dalmatians failing but the goal being succeeded by Fergus, Sid, Big Fee, Dylan and Dolly, Pearl and Hunter who eventually stopped Cruella with her vile plan.

Clarissa lives in Camden in London with her owner Hugo, who spoils her. She also friends with two dogs named Prunella and Arabella.

She lives next door to Dylan, Dolly and their Dalmatian family. Clarissa looks down on her neighbours, seeing them as "ruff raff". 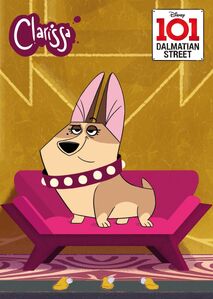 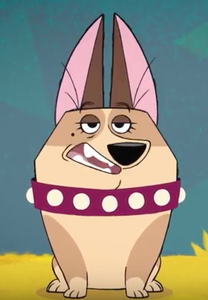