Become the master of Earth (all failed).

Clark Luthor, also known as Ultraman, is the Earth-2 counterpart of Clark Kent, appearing as a major antagonist in the Tenth and final season of Smallville.

Like his normal counterpart Clark Kent, he was portrayed by Tom Welling, who also portrayed Kal, Kal-El, and Bizarro in the same series, and Marcus Pierce in Lucifer.

In the Earth-2 universe, Kal-El came to Earth during the meteor shower that hit Smallville, Kansas in 1989. However, instead of being found and adopted by Jonathan and Martha Kent, he was found by Lionel Luthor, who adopted him, named him "Clark" and raised him as his own alongside his own biological children Lex and Tess.

The fact that Lionel was more supportive towards Clark, made Lex jealous of his adopted brother, making their relationship even worse. He had a tense rivalry with Lex, who branded him with Gold Kryptonite and began an incestuous relationship with Tess.

He also worked as his adoptive father's enforcer, using the alias Ultraman, and at some point became the CEO of LuthorCorp Media (the Earth-2 version of the Daily Planet). He later murdered Lex on Lionel's orders.

On the graduation day of Smallville High, Clark attacked the ceremony and murdered many meteor-infected people including Justin Gaines, Jodi Melville and Greg Arkin.

Clark Kent activates the mirror box, a Kryptonian device that causes him to switch places with Clark Luthor. While Clark Kent was left on Earth-2, Clark Luthor goes to the Daily Planet, where he finds Tess Mercer.

Believing her to be Tess from the Alternate Universe and engages in a passionate embrace with her before commenting on how different Earth-1 is from Earth-2, remarking it doesn't feel right that he doesn't have blood on his hands before lunch.

Tess' suspicions are confirmed when she sees a scar that the AU Lex Luthor gave Clark L. using gold kryptonite. Clark L. rejoices in the fact that Lionel is not in this universe and has been dead for years. He then questions Tess about the mirror box so he can destroy it and prevent the chance of him going back. Tess manages to evade him and he leaves.

Later, Clark Luthor attacks Tess and Lois Lane at the Justice League's Watchtower, crashing into the building through the skylight and landing on the floor, causing the two women to be blown back by the force of his landing. He orders Tess to get up. Lois, thinking he's her Clark on Red Kryptonite, tries to calm him down, but he grabs and violently throws her across the room.

Before advancing on Tess, Clark declared he's not going back to Earth-2 and he's going to make Earth-1 his own. He then demands the mirror box, only for Tess to refuse. He then grins deviously and says he's going to kill her if she doesn't comply.

By the end of the episode, Clark Kent manages to find Earth-2's mirror box and activates it, reversing the earlier switch. Upon re-emerging on Earth-1, he finds himself in a battle-ruined Watchtower with Tess, Lois, and Oliver Queen advancing on him with Kryptonite arrows and guns, strongly implying that a fight took place between the two sides.

Clark Luthor later returns and uses his world's mirror box to return to Earth-1 as he is wanted for murder. Having murdered Oliver in front of everyone and his secret identity been no secret anymore, Clark had to leave Earth-2 because he couldn't live in a world where everyone knew his identity, weakness and wanted to kill him.

Clark Kent finds the mirror box in his loft and picks it up, after which Clark Luthor steps out of hiding and correctly guesses his good counterpart destroyed his own mirror box.

Clark Luthor then poses as Clark Kent, visiting Lois at their new apartment but she realizes he isn't the genuine article and tries calling Tess to warn her that Clark Luthor has returned. Tess figures out for herself what happened when Clark Luthor comes by the ruins of the Luthor Mansion and she catches him rubbing the spot where he used to wear his pinky ring.

After intimidating Tess, Clark Luthor leaves the mansion remains. Tess later sees a present from Clark Luthor in her office at the Daily Planet and finds it contains a revealing dress, shoes and an invitation from Clark Luthor for a dinner date at the Ace of Clubs. Clark Luthor suddenly appears behind her and tells her he can't wait to see her in the dress before disappearing.

Later, Clark Luthor meets with Tess at the Ace of Clubs for their date. He plays on Tess's doubts and her desire to be free from Lionel, whom he wants to kill. As he eats dinner, Clark tells Tess he wants to start a new life on Earth-1 because everyone on Earth-2 now knows his true identity as well as his weakness to Kryptonite.

They armed themselves with Kryptonite weapons, and he threatens to kill Tess if she doesn't help him kill their father. They then go to Tess's office at LuthorCorp, where Tess gives Clark Luthor a device that tracks Lionel's current location.

Tess pleads with him to give her another chance because deep down she really does wants to start a life with him but Luthor says that he can no longer trust her. He tries to drop her, only for Clark Kent, returned from Earth-2, to arrive and save Tess.

Annoyed at the interruption, Clark Luthor turns to face his Earth-1 counterpart and charges at him, pushing him through the glass doors and knocking him into the wall in the hallway. As the two Clarks circle one another, Clark Luthor remarks Clark Kent is no match for him without his dark side. Clark Kent then super-speeds to the Fortress of Solitude, with Clark Luthor close behind. Clark Luthor tackles Clark Kent, and they crash through several crystalline portions before climbing to their feet.

Clark Kent tells Clark Luthor that their Kryptonian birth father, Jor-El, left them the knowledge of the universe, but Clark Luthor dismisses the Fortress as a "music box without the music" and maintains he made his way on Earth-2 just fine.

On Earth-2, inside his own Fortress of Solitude, Clark Luthor calls out to that world's Jor-El, who welcomes him home.

Clark Luthor possesses the same Kryptonian powers as Clark Kent; however, he does not hold back any of his abilities unlike his counterpart. He exhibited the following abilities to their fullest potential: 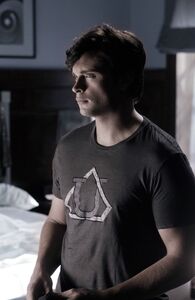 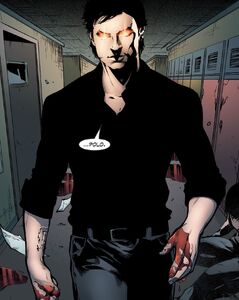 Clark Luthor as a teenager as seen in the Smallville comic book series.