NOTE: If you were looking for the villain in the 1996 Disney film, see Judge Claude Frollo.

The Hunchback of Notre-Dame

Dom Claude Frollo is the Archdeacon of Notre Dame and the main antagonist of the 1831 original Victor Hugo novel The Hunchback of Notre Dame.

Frollo is a pious man who devotes himself to a Puritanical interpretation of God as wrathful and unforgiving of sin. Nevertheless, he is not without humanity: he genuinely believes in redemption and charity, as evidenced by the fact that he spends most of the inheritance left to him by his wealthy parents caring for his younger, alcoholic brother Jehan. He also conducts experiments in alchemy, believing that the creation of gold from clay will bring glory to God.

When he finds a deformed, hunchbacked baby boy abandoned on foundling's bed in front of Notre Dame, he believes that it is his Christian duty to take the child in. He names the baby Quasimodo after Quasimodo Sunday and raises him like a son, employing him as a bell-ringer in Notre Dame, teaching him to sign language when the bells deafen the boy.

When he encounters a young Gypsy woman named Esmeralda, he is immediately attracted to her, even though he has sworn himself to celibacy. Unable to reconcile his faith with his sexual feelings, he convinces himself that Esmeralda is a demon who is tempting him to sin. He is nevertheless jealous of Esmeralda's lover Captain Phoebus and resolves to make her his own or destroy her.

He stabs Phoebus and has Esmeralda incriminated in the attack. When she is found guilty of stabbing Phoebus, Frollo secretly offers to spare her if she will be his. When she rejects his advances, he condemns her to death.

Frollo watches as Esmeralda is hanged in the town square, and laughs cruelly. Enraged, Quasimodo - who had fallen in love with Esmeralda - seizes him and throws him off the balcony to his death. 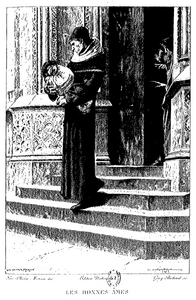 Frollo holding infant Quasimodo on the steps of Notre Dame in 1480. 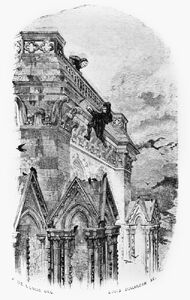 Frollo's death at the hands of Quasimodo.
Add a photo to this gallery

Retrieved from "https://villains.fandom.com/wiki/Claude_Frollo?oldid=3925533"
Community content is available under CC-BY-SA unless otherwise noted.