Manipulating various gangs and turning them against each other

Claude Speed is the main protagonist of the video game Grand Theft Auto 2.

He was portrayed by Scott Maslen in the film.

Nothing is known about Claude Speed's early life. All what is known is that he was nothing more than a mere thug in Anywhere City. However, he soon began to work for many crime lords there. Initially working for many of their gangs, he had an ulterior motive: secretly working for all of them, to betray everyone of the bosses, kill them all and take over the city's criminal scene. After his treacherous nature is discovered by the crime lords, all of them try to kill him but are killed by him as a result. Thus, he was able to take over the city's criminal underworld and Anywhere City went into a chaotic state because of Claude's actions.

In the Grand theft Auto 2 movie, Claude remains mostly unchanged, working for several crime bosses in Anywhere City. At the end of the movie, Claude is killed by an assassin sent by the Zaibatsu Corporation after he steals a van and their merchandise.

Claude is an extremely ruthless, short-tempered, cold-blooded, relentless, loathsome and callous sociopath who is willing to commit the worst crimes without hesitation, remorse or regret. He is extremely disloyal and very treacherous for everyone and only cares about being respected. He will work for anyone who will give him the cash and resources needed and easily manipulates, betrays and hurts anyone who is between him and his goals. He is also extremely rude and insensitive as well as very violent and ferocious in killing people. He goes far to the point of spitting on the corpse of people he killed. He worked for all of the gangs at the same time and was successful in turning them against each other to take over the city's criminal scene. 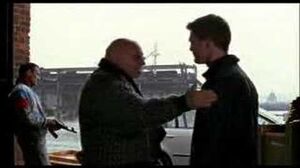 Grand Theft Auto 2 Movie
Add a photo to this gallery

Retrieved from "https://villains.fandom.com/wiki/Claude_Speed?oldid=4129523"
Community content is available under CC-BY-SA unless otherwise noted.