To be the most powerful witch in the world.

To rule the world and all that is evil one day as the "Queen of Darkness" (both failed).

Claudia, the self-proclaimed "Queen of Darkness", is a seductive, tempting, irresistible, powerful wicked witch and the main antagonist of the 1997 fantasy-comedy film A Simple Wish.

She was a former fairy godmother turned into an evil witch who wants all of the powers of her fellow fairy godmothers for herself. She searches for her mystical magic wand which if imbued with more magic, would make her unstoppable.

She was portrayed by Kathleen Turner, who later portrayed Dr. Elena Kinder in the 1999 comedy film Baby Geniuses, and Beverly Sutphin in Serial Mom.

Claudia is a former fairy godmother, selfish and power-hungry by nature, she used her magic more for her own selfish purposes rather than granting peoples' wishes. Because of this, Hortence, the Head of the Fairy Godmothers, took her wand away and fired her. As a result, Claudia fell to the dark side completely and became an evil witch.

After full mastering dark magic, Claudia shows up at a formal fairy party one night determined to get her wand back. After she first tricks a receptionist into eating a witch's apple, putting her to sleep, Hortence arrives and orders Claudia to leave. Claudia refuses and unexpectedly casts a spell that turns the head fairy into a paper-thin, two-dimensional version of herself. The spell renders Hortence completely powerless, leaving Claudia free to stuff Hortence's mouth with bricks and steal all the checked wands from her office. Claudia escapes with her accomplice Boots, the pet dog that she has turned into a human, believing she has all the wands... however, she is missing Murray's wand, which was not turned in because he missed the meeting.

The next day, Annabel realizes that Murray has left his magic wand behind and decides to return it to him, but Charlie breaks it. She tries to fix it during art class but fails. She runs out of class and hides when her teacher tries to confiscate the wand, but unexpectedly meets Murray. The two disappear to Nebraska, by way of a misconstrued spell cast by him to get out quickly. After he tries and fails to turn a selfish motel owner they meet there into a bunny rabbit (turning him into a 50-foot-tall (15 m) rabbi, instead); the two end up back in Central Park. Because of them disappearing in an unexplained way, the school closes early.

Charlie finds them. Annabel begs Murray to try to grant her wish now that they are close to her father, but due to yet another mishap by him, Oliver is turned into a statue, Duchess into a mouse, and his carriage into a pumpkin. To fix the problem, the three of them go to NAFGA and ask for the help of Hortence. When they arrive, they find her, who is still under the effects of Claudia's spell. Murray attempts and succeeds at blasting away the bricks lodged in her mouth. She tells them of Claudia's plot and explains that the awry spell must be lifted before midnight, or Oliver will be doomed to remain a statute forever. Claudia, meanwhile, has been looking through the wands, searching for hers. After going through, she realizes it is missing and now belonging to Murray, and is determined to obtain it.

Annabel and Murray head to the theater and see Tony Sable, the selfish and conceited actor who is auditioning for Oliver's part. Knowing this could ruin her father's chance of being on the show, she asks Murray to sabotage the audition any way he can. First, he tries to make it rain on the stage (after being inspired by the "rain check" he gave Annabel the night they met), but it is dismissed as a simple technical problem and the audition continues. Then she asks him to give Sable a frog in his throat to impair his singing. He takes this wish too literally, and frogs start hopping out of Sable's mouth, shocking the cast and crew. Annabel and Murray celebrate but Sable gets the part since Oliver has not shown up. Boots, who has been looking for Murray, finds them. Murray mentions the story of Brer Rabbit to Annabel and they beg her not to take them to Claudia's lair so she will. Boots is tricked and "kidnaps" them, with Charlie following not too far behind with Murray's wand.

Claudia catches them and demands them to tell her where her wand is. She tells Annabel that she will make all her wishes come true. When she refuses to tell her, as punishment, she changes her and Murray into ballerinas and makes them dance uncontrollably. She composes the music and makes it go faster and faster until Annabel agrees to tell her. After a fight over the possession of the wand, Claudia wins but Boots steals it back and gives it to Murray. Out of spite, Claudia turns her back into a dog, then attempts to cast a spell on Murray. The spell, however, rebounds in the mirror, drawing her into it. Claudia's struggles to escape causes the mirror to fall down, shattering into tiny pieces.

Claudia is a powerful witch who is skilled in dark magic. When she used magic, it appeared as violet purple swirls coming from her fingertips. This kind of witchcraft is considered forbidden, corrupt and dangerous by other good fairy godmothers but Claudia cares little for that and she craves everything her heart desires including power. 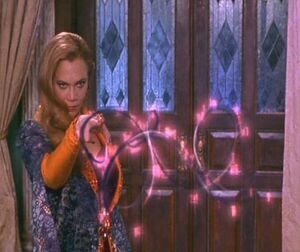 Claudia, the self-proclaimed "Queen of Darkness", demonstrates her magic. 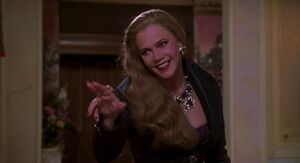 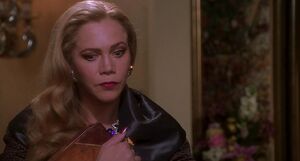 Claudia attempting to steal the Book of Fairy Godmothers 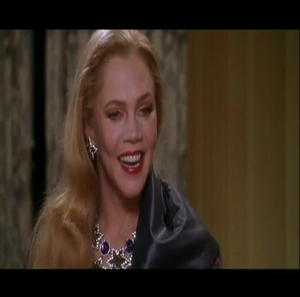 Add a photo to this gallery
Retrieved from "https://villains.fandom.com/wiki/Claudia_(A_Simple_Wish)?oldid=3550757"
Community content is available under CC-BY-SA unless otherwise noted.